Peter Koops wrote in the Volkskrant on November 16 about Kim Wilde's concert. He makes a few random remarks, without further elaboration. For instance, he says that the music plays on the teenager's puberal world of thought. Where does he get that from? Is that how he experiences it, has he asked his son or does he just interpret it from the age of the audience.

Also Kim made the impression of a sex symbol on him. Come on. This takes more than just a nice appearance. I had to laugh about the line that said she looked like the baker's daughter. I hope he has gotten rid of the dirt out of his eyes by now. 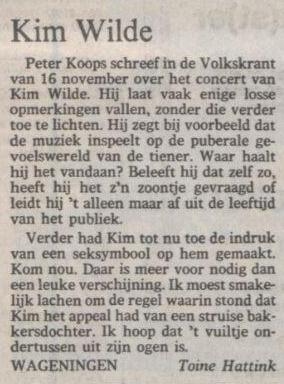