1981 was a momentous year for Kim Wilde, providing her with major hits in numerous countries around the world, apart from her native Britain, including Belgium, Denmark, Germany, Sweden, France, South Africa, Finland, Switzerland, Holland, Austria, Ireland, Australia and Portugal. Already she has received several awards as the most popular female singer in Germany and most of her releases have now topped the million-selling mark.

With her British success reflected on an international level, 1982 already seems set to provide Kim with even more exciting prospects as Mickie Most leaves for America in January to arrange for her entry into the worlds largest record market: The United States.

Kim was born at Chiswick Maternity Hospital on November 18th 1960 and weighed 8lbs 10ozs. She is a Scorpio has blonde hair, blue eyes and stands 5 feet 4 ins tall. Her first four years were spent at Watchfield Court, Chiswick then the family moved to Blackheath. Kim moved to her present home in Hertfordshire, near Welwyn Garden City at the age of eight. For two terms she attended a boarding school, Oakfield School in Dulwich. Her favourite school was Tewin Primary where she studied classical piano. At the age of eleven she attended an all girl grammar school, Presdale School, Ware and then took a one year foundation course at Hertfordshire College of Art and Design, St. Albans.

She left the college of art and design to pursue a musical career. Her records are produced by Ricky, her songs penned by Ricky and Marty. She signed with Mickie Mosts RAK Records at the end of 1980 and has had a number of million selling discs during 1981. Marty had 14 hits in his career, his highest chart placing being No. 2 which Kim achieved with her first release. Her hits to date include the singles 'Kids in America', 'Chequered Love', 'Water on Glass', and 'Cambodia'. Her debut album 'Kim Wilde' reached No. 2 in Britain and No. 1, in several countries around the world.

Many publications regard Kim as the most sensational looking female singer in Britain and she has been described as "The Brigitte Bardot of Rock" and "The Bardot of the Eighties". Not unnaturally she has already received several film offers. Bill Marshall in his Daily Mirror feature wrote "Her jeans are so tight you expect to see her skin on the outside. Close-up this girl has a skin like a flawless Golden Delicious. And she has fine generous, promising slightly over-ripe lips as lush as strawberries".

Despite some journalists who initially believed that her looks were enhance by make up artists, hairdressers and fashion stylists, Kim does her own make up and hair and her look is entirely natural. She also prefers shopping in Oxfam and charity shops and her clothes are ones she has bought from such places over the pastr few yeaqrs rather than expensive fashions from the established fashion pundits.During 1982 Kim spent much of her time travelling abroad, throughout Europe and as far afield as Australia, promoting her records. During 1982 she will be making her debut as a live performer with her own backing band. 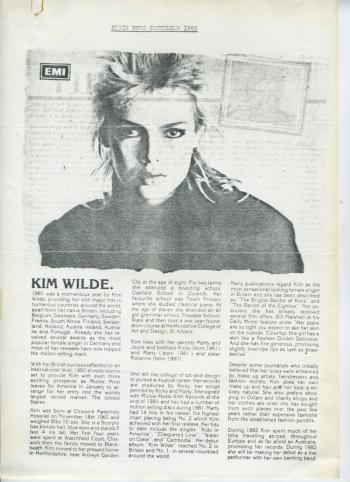