Do you believe that children of celebrities have it made? British pop singer Kim Wilde doesn't think so. "Daughters of famous fathers don't have an easy time of it", she observes between sips of champagne. "I've grown up having to be strong about what I want to do. If you're not strong, nobody's going to be cheering for you. You have to convince people about how serious you are."

In 1958 heart-throb Marty Wilde emerged as one of England's politer versions of Elvis, running up an impressive string of UK chart successes. Today his daughter is repeating that feat with a dynamic run of her own hits, and not on the strength of her father's fame. Actually, the slender, blonde-haired Wilde feels that the connection was initially more of a drawback than a help. "The fact that Marty Wilde was my dad made people a bit suspicious as to how I got into music, if I was pushed in, my motives for getting in, and if I was helped along more than I should have been."

All those doubts are behind her now. Since scoring quickly in 1981 with "Kids in America", her very first single, Wilde has become a dependable hitmaker in her homeland and a slew of other countries. ("Kids" has even had some luck in the US charts.) More impressive, perhaps, she's also managed to charm the notoriously persnickety British press. Normally, Wilde's brand of revved-up, hard-edged pop - sometimes compared for superficial reasons to the Go-Go's or Blondie - provides an easy target for journalistic snobs. However, for now it seems to be OK to like Kim Wilde.

It's certainly easy to be won over. The soft-spoken 21-year-old who's winding up three long days of interviews at her record label's Manhattan office displays the composure of a vet and the cheerful common sense of someone who's resisted the arrogance that often comes with stardom. Aside from mild complaints about overwork, Kim Wilde seems generally pleased with her lot. A nice change, eh?

Between 1958 and 1962 Marty Wilde chalked up eight significant 45 hits in the UK, most of them covers of soft American smashes like "Sea of love" and "Rubber ball". His finest moment was the delightful self-penned "Bad boy", Marty's closest brush with American Top 40. (Robert Gordon, savvy cat that he is, revived the tune for the title cut of his fourth LP.) Kim says that by the time of her birth in 1960 his career had begun to cool.

"I grew up on the decline of what had happened before", she continues. "He'd gone into cabaret. He was still making records, but he was concentrating on songwriting. I'm glad I was born when he was at that stage. I worry about kids who grow up when their parents are at the height of their fame. That is hard to take."

She never consciously plotted out a career for herslef in music. "I just always sang. There was never a big decision in my life." Wilde's first professional involvement came at age 12 when brother Ricky, one year her junior, cut some 45s with studio mastermind Jonathan King. She sang backup vocals and dad Marty wrote the tunes, a foreshadowing of things to come. "Ricky left school when he was 16 - he didn't like academics - and went on the road with my dad, who was doing a lot of cabaret. Ricky brought an Omni synthesizer into my dad's group, which had previously been just guitar, bass and drums, and made it into a more interesting, modern band. Dad ended up doing things like 'Space Oddity' onstage."

According to Kim, her father did considerably less to foster his female offspring's interest in music. "He seemed to try to ignore it. I think he was afraid of what might happen to me. Obviously he's seen a lot in his 25 years in the business and it's something special when it's your daughter, surely. I was actively discouraged to the point where I'm surpised I had the confidence to do it at all."

But self-assurance she had aplenty. When Ricky made his first demos, Kim contributed backup vocals. And when he landed a contract with Mickie Most's RAK Records, she came down to the studio to help with the initial sessions. Kim's cool melts a bit as she recalls the situation. "Mickie saw me and heard me and it must have got around that I was not bad."

Most, who produced Herman's Hermits and the Yardbirds in the '60s and released Suzi Quatro and Hot Chocolate on his label in the '70s, obviously has a knack for spotting commercial talent. Did he decide Wilde looked like a star before even hearing her? She laughs, exhibiting more than a trace of modest embarrassment. "Apparently, yeah, that's how it happened. He doesn't say it to my face, but I hear that as soon as he saw me..."

So Rick Wilde's first project for RAK was to produce a single for his siter. Like all of the records that have followed, "Kids in America" was written by Ricky (music) and the newly-supportive Marty (lyrics), and produced and almost totally played by Ricky. It was a huge smash all over the globe, as were "Chequered Love", the followup, and her self-titled debut LP. That's Ricky next to Kim on the cover, by the way. "I don't feel it's my success - it's our success", she rightly observes.

Wilde professes to have been sure from the beginning that "Kids" would click. "It never occured to me that it would flop. When I was recording it I just felt so positive, and if someone like Mickie Most is telling you something's gonna be a hit, there's not a lot of reason to think otherwise. I'm a naturally optimistic person, anyway."

There's nothing in the foreseeable future to undermine that positive outlook. Wilde's brand-new 'Select' LP, featuring her recent single "Cambodia" and "View from a bridge", shows enormous growth. The Wilde siblings have added a barrage of incandescent synthesizers without sacrificing any popcorn charm.

On "Action city" and "Just a feeling" Ricky employs a dazzling wall-of-keyboards approach and Kim displays considerably more aggression than before. Meanwhile, "Kids in America" has a good shot at becoming a hot chart item here, which Kim generously attibutes to the prior impact of the Go-Go's. After a busy year-plus of public acclaim Kim Wilde sounds like a seasoned pro.

"I think success coming like it did went over my head. It was happening so fast at first that I wasn't appreciating it the way I do now. Now I've got it in some sort of perspective, I can't get terribly exciting about anything - I've never been that kind of person - but I feel really good."

And what is the secret of her success? She grins. "I seem to arrive places at the right time." Kim Wilde's smile unfolds into a laugh. "I'm lucky." 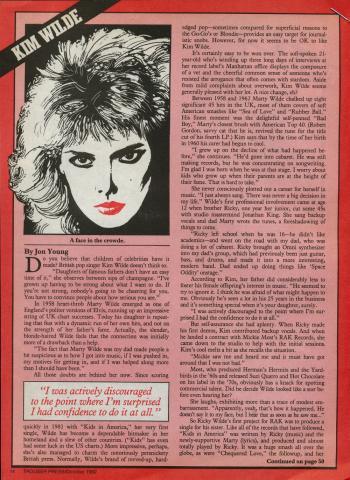