Kim Wilde at the Capitol

It's a sad reflection on the work of Kim Wilde that on six separate occasions her band struck the first chords of 'Kids in America', only to break into variations on the same theme. If ever there was a case for a singer to be restricted to singles, this was it. It cannot be denied Kim is extremely pleasant to the eye, but the music in this show was equally tiresome on the ear.

She opened with two hits and things were looking good, but it looks like she has suffered from too much single success too soon, because back-up stuff from her two albums to date just didn't measure up.

'Kids in America' was saved for an encore so at least closing on a high note, but apart from a stunning light show, there was little else to applaud here. 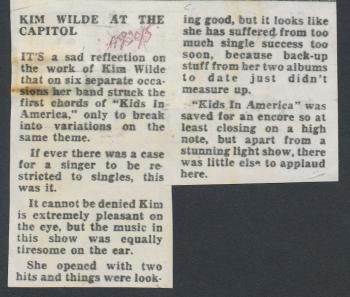