Kim Wilde, the English singer of the massive European hit single "Kids in America", had been in America two days. "You've got it terribly easy over here", Wilde says, running wild with first impressions while on the phone from New York. "You've got a great life and there's an awful lot for young people to do - and I envy that. I think the youth here have a lot going for them and there's a hell of a lot of opportunity."

Whew. "That's just from looking about", the 21-year-old singer says, adding just a note of caution.

Wilde's enthusiasm perfectly matches the mood of "Kids in America", a song that sold over 2 million copies in Europe before she ever set foot in America. "Kids", which as her first American single is picking up strong local airplay on WBCN, is a breathtaking, pulsing pop tune. Organ notes percolate along the melody line; images of bright lights and fast cars flash by. "Oh don't try to stop, baby hold me tight". Wilde sings, "Outside a new day is dawning / Outside suburbia's sprawling, everywhere / I don't want to go baby". Then Wilde swings back into the chorus - "We're the kids in America - whoa-oh", and she is part of a wave of kids celebrating youth, lusty adventure and the eternal night out.

The tune, which Wilde says is based upon impressions of New York, is irresistible. Some critics, however, have suggested that you ought to try to resist. In England much of the critical reaction to Wilde has been of the "I like her, but I'm not sure if I should" variety. Wilde sings bouncy summertime music. There are some ironic twists within the songs (upbeat melody and downbeat lyrics) but Wilde's pop tunes have little pretense to posterity. They have no political import. They coast lightly along breezy melodies.

In an interview last year with Wilde, a writer for England's New Musical Express charged: "[Listening to] a Kim Wilde single is like eating a bar of chocolate".
"Yeah, and really enjoying it", Wilde responded. "You don't try to analyze a bar of chocolate."

She says she still gets that qualified praise. "I think it is a fairly widespread attitude. But I think it's one that's dying out."

Moreover, Wilde isn't as concerned about critical dismissal. "I've just grown a lot more confident about myself and what I'm doing and I've come to realize it doesn't really mean a damn if something's trendy or if it gets written about in the right papers. I'm just very sure about what we're doing."

When Kim Wilde uses the word "we", she's not using it in the royal sense. She is part of a family team; her father, Marty, an English pop star of the '50s, and her younger brother Ricky, wrote all the material on her debut album, "Kim Wilde". The key to her success is that Wilde sings these songs written for her - from the bubbling dance club hit "Chequered Love" to the moody "Tuning In Tuning On" - as a believer, not as a puppet. Like the Go-Go's, there's a sense of transient pop glory.

"I feel very close to all the material that I do", Wilde says. "It's almost like being an actress in a play. You just feel like that person for the time that you're on stage and when you're off you don't feel like that person. It's just the total enjoyment of singing and using my voice as an instrument which harmonizes with the music and production."

Kim Wilde wasn't intended to be the star. Her brother had a record deal with producer Mickie Most - a hitmaker who's had a hand in records that have sold a combined total of over 500 million copies - and Ricky was initially slated to be the singer. Kim, who 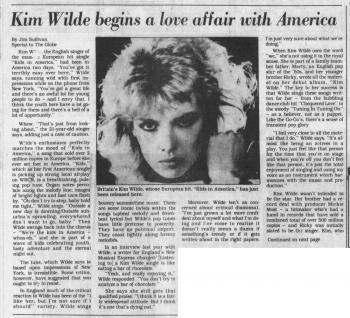