Kim Wilde can't get used to her success yet

Two years ago Kim Wilde was still in school and was making some extra money by cleaning in a hospital. Now she is a star in Europe and even in the States. Thanks to the successful compositions of her father and brother, the blonde British singer shot to the top like a comet. "When I see myself on TV", she says, "I always think the others look a lot more like a pop star than I do..."

About 25 years ago the rock and roll raged across the western world. In England a 19 year old boy had a lot of hits with titles like Teenager in love, Bad Boy, Donna and Sea of love. His name was Marty Wilde. Marty only tasted success for a couple of years. After losing his wild streak, British youth didn't want him anymore and diverted their attention to a couple of groups from Liverpool, such as the Beatles.
But Marty and his wife Joyce had two children, and those children grew up. Kim, the oldest of the two, seemed to be a lot like other girls of her age. After highschool she went to art college and at home she played records by Madness, The Clash and The Police. An ordinary girl.
Brother Ricky, a year younger than Kim, had to follow in his father's footsteps. He was a composer and producer fro Micky Most, and he didn't do all too bad there. Together with father Marty he wrote a couple of hits for the well-known group Hot Chocolate, but Ricky wanted more. He'd written a song, which he liked, and he wanted to record it. Micky Most liked Kids in America, but he felt that the song should be performed by a woman. And so Rick got his sister to sing it. Most gave Kim a shot and when the first takes were ready, he knew he had discovered a new star.
Kids in America shot to the top of the charts in countless countries. After that, Chequered Love. Water on glass, Cambodia and the album Kim Wilde did the same. Of course Art College was in the past for Kim. At the moment she has more than enough to handle with recording the second album and publicity work.
The musical family Wilde considers itself to be one whole. "It was a great thing for us to earn some money again", says Kim, "because my dad's career didn't fare too well lately. His last hit is from 1968 - Abergavenny - and performing live in nightclubs gets very tiresome after a while. Working like we do now is a great change of pace: he writes the lyrics, Rick composes the music and I sing. And my mother sometimes joins in the backing vocals!"
The artist collective Wilde still lives in a luxurious villa in Greenwich, earned by Marty during his career. Two years ago the family was extended by the arrival of a daughter, named Roxanne after Rick's and Kim's repeated proposals, after the classic Police song. Six months ago, Marty junior was born. The future is already in sight...
The inevitable question what it's like to be the daughter of a famous former star, has Kim answering it in an irritated fashion, because she has earned everything for herself, while on other occasions she says that she had learned everything from Marty. The truth will be inbetween.
"Dad is now 42", says Kim. "When I was born in 1960, he was in fact losing his lucky streak. I have never been bothered much by his fame. I believe that there are worse things than having a famous dad. Being neglected by your parents, for instance, or being teased in school, or having to wear glasses."
When Kids in America was just released, the British papers only wrote about Marty's little girl, but now the tables have turned. When dad is walking the streets, they say "Hey, it's Marty Wilde, Kim's dad!". It's about time, too."
A woman with pretentions? Kim says she isn't glamorous at all. "Whenever I see myself on TV, in Top of the Pops for instance, I always think that other look a lot more like a pop star than I do...", she says. She hates the kitsch image of groups like Bucks Fizz but doesn't smile before the camera because it would hurt her image.
"There's always something to comment on", Kim sighs. "You can't do everything right. But I am pleased with myself for the moment. And as long as dad and Rick keep writing good songs for me, I can't complain. To write songs for myself? That will happen. That will have to mature in my head. Because when I start writing, it has to be absolutely perfect!" 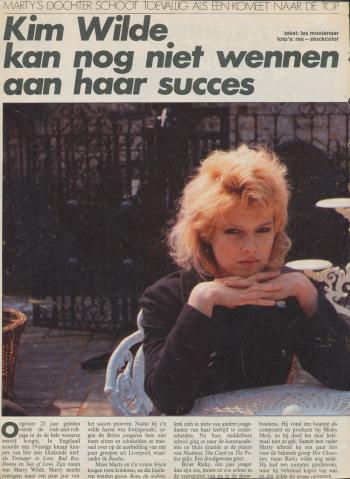 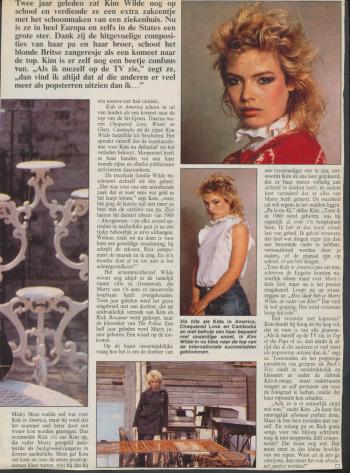