Kim Wilde doesn't want to be a dumb blonde sex kitten: 'Why am I the BB of pop music?'

The family company Wilde from Saint Albans in the English Hertfordshire has worked overtime again. The result, the single 'View from a bridge', is in the shops here since yesterday. The son composed the music, father Marty wrote the lyrics, but mostly daughter Kim sings the song.

What started by way of an experiment last year has become a home industry with a turnover of millions. The focal point is the 21 year old singer, who can barely grasp all the fuss about her person. The change from art academy, where she was painting and drawing, to the fast world of pop has gone too fast. "I knew I would get to sing sooner or later", Kim Wilde explains, visiting our country for promotion. "But I never took into account the consequences. If I am to believe the outcome of British polls I have suddenly become England's most sexy female popstar. I get letters with marriage proposals. One day I'm in Amsterdam and two days later I'm in a television show in Tokyo. These were all things I didn't take into account when I recorded "Kids in America". I was happy my brother gave me a shot at lead vocals instead of backing vocals. The good thing was that dad foresaw all this success, while I didn't want to believe in it and didn't worry about it."

The now 42 year old Marty Wilde, some twenty years ago a popular rock & roll singer himself ('Teenager in love', 'Donna' and later 'Abergavenny' are attached to his name, originally Smith), proclaimed that his daughter's success would overshadow his own even before his daughter left the recording studio. This confidence almost affected Kim aversely. "I wasn't so sure of myself. Especially after my first confrontation with the media. They were horrible. Everyone wanted to hear what I had to say about my father. How important he was for me. I was treated like a piece of decoration without a function of its own. Fortunately "Kids" was a success with the audience, so they found out I wasn't just another pretty face. I was no longer the girl who also had to do the same thing so desperately."

As the eldest daughter of an artists couple (mother Joyce was a singer with the Vernons Girls for years) Kim Wilde never believed in the story of the apple and the tree. "My crib was in the dressing room often. Of course i don't remember this myself. When my father started playing live I wasn't even born. I think it's nonsense to say that my parents brought me into this business. I had a childhood much like that of other children. The only advantage is that I've seen how difficult it is to stay popular for a long time. And I do mean I've only seen this, because my father never brought his troubles back home with him."

Her father's support and that of her brother is self-explanatory to all of them. "They are totally at my service. Rick would want to be in the limelight himself at some point, but right now his sister comes first. My father will always support me. He's blossoming himself now that he's dedicating himself to my career. The theatre work was boring him and people may have become bored with him too. There were less offers. Many theatres have closed down, too. There were stories in the press that he had a drinking problem. It seemed like that, to be honest. Even while he always said to me that drugs and drinking were a waste of time and money. The recording contract RAK offered me helped him overcome this problem at once."

Kim Wilde, who doesn't cite her father but Dusty Springfield, Cilla Black and the Ronettes as her rolemodels, doesn't feel constrained by her family's input on her career, just like Kate Bush. "Sometimes I consider living in an apartment in London. It would be good to explore my own musical ideas. I am very curious what songs I would write myself. It doesn't happen while I live at home. I'm just too lazy. I have some influence, but ultimately Ricky and dad set out my musical course. On the other hand, what would I do alone in a flat? When I get home everyone is full of interest and wants to hear my stories. I enjoy seeing my siblings (Roxanne, 2, and Marty Junior, 6 months) and let go of the weird pop world for a moment."

Kim doesn't have any boyfriend at the moment, not even Steve Strange, the singer of Visage, with whom she appeared on some parties recently. "Steve and I are good friends, that's all", she says without any further explanation. "I don't consider it to be a problem that I don't have a steady boyfriend. It's not that I wouldn't want to make the time for one, but I think I'm too young. Boys have started acting differently towards me since I've become famous. They are either very timid or very outspoken, it seems. In both cases they are afraid to come near me. As a result, you only come in contact with people from the business. I don't really want that."

In England Kim Wilde is already known as the "Brigitte Bardot of pop music". Incomprehensible, the singer thinks. "I try not to come across as a sex kitten. You'll never see me smile on photographs. I am not expressing myself visually like Steve does for instance. I always wear simple clothing, usually second hand and I don't wear makeup. My hair is blonde, that's true. Ever since art college."

Her most recent hit "Cambodia", the song about a Thailand based pilot who doesn't return from the country, can be called a political message. But Kim doesn't want to know much about politics or messages: "I want to make music. Nobody has to search for a deep meaning behind my song lyrics. I don't want to think about political issues or world problems when I'm singing." 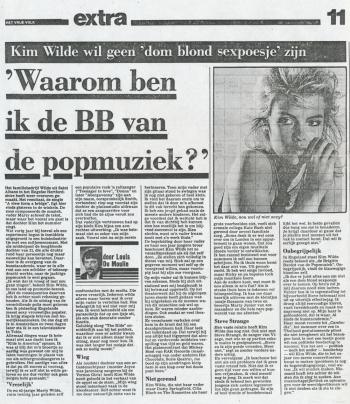