Kim Wilde - fear of things getting out of hand

Kim Wilde, England's brutal answer to Deborah Harry, continues her young success story with her new single: 'View from a bridge', which - we hope - is accompanied by another beautiful little video. Without snakes this time, please. Almost coinciding with this single her debut album, with three European hits on it, is released in America. When the Americans find out how much younger she is than Deborah and how much sexier than the Go-Go's, we might not see Kim here ever again.

Business is handled well in the Wilde residence. Dad and brother Wilde write the song, beautiful Kim sings them and projects a million teenage dreams on the little screen. With a radiance that knows no boundaries. A perfect combination of sensuality and naive beauty. The face looks a bit like a young Brigitte Bardot: full sensual lips, expressive eyes with a touch of arrogance and like a crown the wilde mane. There's no need for further showing off of her curvy body. No tight clothes, no frivolous movements. That would just disturb the dream.

Kim Wilde can look back on a good year. A few hits and a strikingly mild attitude from the rock press, that usually wants to tear down the dream of a singer with a nice face. One has been nice to Kim, even if she isn't critical of society in her pop. Like a Toyah or a Siouxie. Her music is nothing more or less than intelligent pop. It's mostly her hard to analyse charisma that sets her apart from her competitors. Even if the productional input of hit doctor Mickey Most cannot be underestimated. He has discovered her and have given her the chance she so badly wanted.

For the rest she stays herself for as much as possible: a beautiful girl of twenty with not a lot more to wish than singing. She had the wish since she was in art college, which he went to for a year. Kim: "I like art, especially French and Dutch painters from the last century. But I never went into it too seriously. I was waiting for a chance with Mickey Most. I think my father always knew I wanted to get into showbusiness. He stretched it until I was old enough in his eyes to be thrown before the lions. Twenty is a good age. You are a little mature then."

The mirror has been telling her for years that she's got everything in the right place. Something that the men in her vicinity didn't miss either. Kim didn't feel like being thrown into the world as a sex kitten with a pretty voice. No ooh-la-la posters and little scandals. The personality had to shine through the dream. Although she is the last to deny her sensual attraction. Kim: "Every woman uses this. Maybe a little more in this business. But I refuse to suggest more than I've got. I wear normal clothes and I won't wear wet t-shirts or skintight bodystockings. I am aware that boys project their dreams on me. It will remain tasteful as far as I'm concerned. And sexy for as long as I think it's fun to do it."

Whether America will appreciate this wholesome approach is an open question. The rock girls on top over there, Pat Benatar, Deborah Harry and the Go-Go's, are supposed to put a lot of sex in their acts. Kim doesn't worry about that phase in her career yet. For now she has no plans to perform live in America. Kim: "The LP is released and a single, which they find appropriate over there. When the response is favourable, I will fly over there for some radio interviews and a chat with the writing press. Maybe a TV performance. But surely not live. I'm no ready for that yet. Although a guest performance in one of the clubs in New York and L.A. seems like a stunt. For now we concentrate on Europe and Australia. I have rehearsed with a few musicians over the past few months. I can cope with the job here. I can't keep the audience waiting. They will start to suspect I can't sing live."

You can make a big bet on the success of Kim as a live artist. She will cause scenes comparable to Deborah Harry's breakthrough. Scenes that make Kim a little fearful. Kim: "I have a silent fear that a performance will get out of hand. I've seen it with other rock singers. That's why my performance won't be spectacular at first. Women are more vulnerable on stage than men. I know that Debbie had to run in the beginning. Well, in a miniskirt. It provokes a lot. My clothes will be a bit more refined. Not a lot."

Kim has said in an English interview that she is rarely approached by young men during parties. And that's not the intention. Kim: "I get the impression that they are afraid of sarcastic comments from me. There's never a guy who comes up to talk to me. Maybe sometimes a drunk one who asks me whether I want to see his stamp collection." Recently it has changed a little. When she got back from wintersports Kim got an invitation from Steve Strange from the band Visage. Steve usually uses more make-up than Kim. But anyway. After the nice evening she posed reluctantly. Kim: "Of course. With such a photograph the journalists suggest an intimate relationship. We didn't go further than a vodka with orange juice."

Nonetheless it's a nice thing to be so photogenic. Kim: "It sound arrogant to agree with that. But it's nice to come across so well. I won't deny that I would like to have a career as an actress. Although I don't know if I'm better than any other amateur. I am attracted to the media of film and television. Making a video is a real sensation to me. Singing and acting is great. I would accept an offer for a television film in time. Everyone has told me that showbiz is really hard work. I don't experience it like that yet. I enjoy every minute." 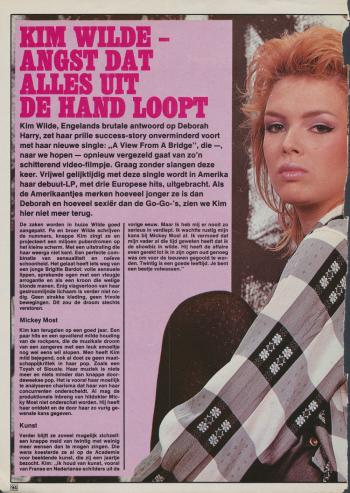 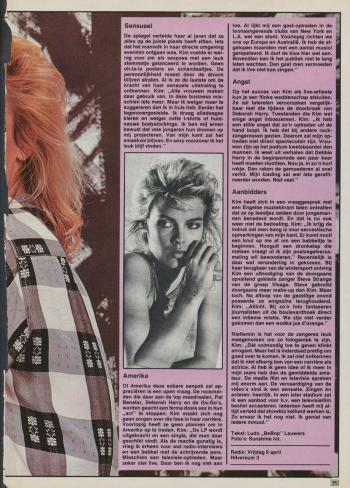