After a series of video-crafted hit singles with 'Kids in America', 'Chequered love' and the current 'View from a bridge'. Kim Wilde will now face her major test when she starts doing live shows.

Wilde recently made her debut on British pop show Top of the Pops and announced that she will be undertaking her first British tour in October.

'I must admit I'm nervous', says the woman who looks ultra-confident on her clips. 'It's three months away, but already we've had to start organising, and there's so much to do. There are times when you think 'oh Christ, how will I go', and you have a moment of panic but obviously I am confident or else I wouldn't even do it.'

Wilde says she's toying with the idea of playing additional keyboards on the tour, although she says that obviously her audience will want her to be right up front, and that she'd rather be concentrating on getting to the crowds.

She says that she might be touring Australia with the band next year. Wilde, who still lives at home with her parents, says that stories of romances are getting exaggerated. Adam Ant and Steve Strange are 'just good friends' and the story of Mick Jagger making a pass at her in a London disco but being deterred by her three bodyguards is untrue.

'I don't go to nightclubs, I don't have bodyguards and I haven't met Mick Jagger. My own ambition is to meet Elvis Costello, I think he's fabulous.' 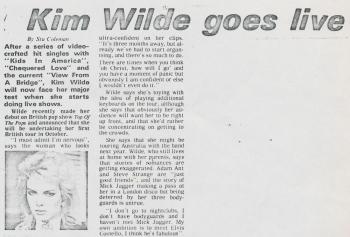