Kim Wilde: "I am not a singing sex bomb"

For a moment Kim Wilde drops her mask. That's when the 21-year-old British singer actually lets out a burst of laughter when asked if she feels like a pop star. The photographer is there quickly to capture the unique scene, because Kim Wilde rarely smiles around photographers. Not because she is an arrogant aunt, but because Kim Wilde refuses to present herself as yet another ignorant blonde in which pop music is so rich. "I feel like a little star at the most," she laughs. “It is precisely the people around me, the record company, radio and television, who push me forward as the big star. I always find that very amusing.”

The past few days Kim Wilde has been in our country to give Toppop her new single 'View from a bridge' a boost. It is now her fourth single and nobody doubts that after 'Kids in America', 'Chequered love' and 'Cambodia' this album will also be a big hit. Neither is the confident Kim. Because it is going well with her still young career. Or rather: the Wilde family business, wholesalers in fresh, cleverly composed pop songs, is flourishing. Her father Marty Wilde (42) - In the old days a celebrated rock 'n roll singer with hits like Donna and Teenager in Love - and brother Rick were at the cradle of Kim's successful career to date. “I come from a very creative family. I often went on tours with my father and I learned a lot from that. But precisely because I saw him very closely at that time, you see how relative success can be in pop music. That's why I have my feet on the ground; I especially don't want to go through life as a singing sex bomb, because such an image has a very limited shelf life ”.

Yet Kim Wilde was all too often portrayed like that after the release of her first big hit Kids In America. “I know a lot of people thought of me in the beginning as a nice-looking extension of my dad and brother's musical aspirations. They write the lyrics and compose the music, so Kim Wilde will not be able to do anything, it was argued. I believe I have now proven that I am more than just Marty Wilde's daughter. Musically, Kim Wilde may now be fully accepted (even the usually very negative British press has written rave reviews), but her private life is still a grateful object for tabloids. Especially the fact that Kim does not yet have a boyfriend constantly provides material for the most utter nonsense.

“Ah”, Kim sighs, “that kind of magazine is a given. Certainly in England you are no longer considered seriously as a newspaper or magazine if you do not have a daily gossip column. When I was recently spotted in a disco with Steve Strange (better known as pop singer Visage), a blossoming romance was immediately suggested between us. We both know better and I have no desire to say that it is not so. Let them write whatever they want, I find it all equally ridiculous. I always laugh about it,” she remarks soberly. "I am passionate about music, that's all that matters when it comes to my person." Her second LP, Selective, which will be released in May, is an important indicator for Kim Wilde's career.

“That first record was a huge hit, because my music was new. No, I don't know which box to put it in, I always call it Kim Wilde music. But now everyone knows me and my music and then they start talking about whether you can keep fascinating, not only with hits, but also with the other songs on the record. Yet I expect that Selective will also work, I have had a lot of confidence from my fans and I will not betray that. I am always concerned that they 'form my audience and that thanks to them I have come this far. Hence no pop star, but one star. I never want to experience that deadly distance between artist and audience.” 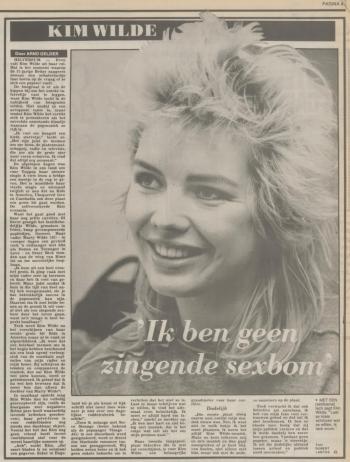