"Well, then I will start my recorder", says Kim Wilde. We're startled. Did you read a book about Nixons Watergate-scandal? Are you surprised by your own smart answers in retrospect?
"No. I just like to listen to interviews later on. I will know exactly how I felt that day."

You have just done your first live concerts. First impressions?
"The past two years I've gone through all sorts of things. I must confess that my live debut was the most exciting moment of all my life. I was on stage, but still I was also part of the audience. I was looking at the whole scene with the twinkling eyes of a third person, a tourist. It's a really great feeling to conclude after all those months that you can still be surprised. The very first time the hall was filled entirely. They were there in thousands, in Denmark. I remember an older man with sunglasses on, a little blond girl on his shoulders. Those two have followed the tour for a week. They were always at the front row. Everyone went crazy. It was great!"

What is the biggest difference with your recording work?
"You have to do it. It all comes down to you. In the studio I can depend on the help of my father and Ricky. They will help me when it all goes wrong. They couldn't now. Even a string of hit singles is no good basis for a good live set. I was there, the band was there. You sink or swim."

How come you are still so down-to-earth about your success?
"Could be my temperament. I am a relatively quiet person. Which doesn't mean that everything leaves me stone cold. Something that really captures me, I want to know all about. I am lucky to have great parents. They are a stable factor in my life. Not only now, but also when I wasn't famous. They've always helped me. I didn't always feel comfortable being the daughter of Marty Wilde. My school years weren't very nice at all. The jealousy of other children was often too much to bear. I was subjected to ridicule and teasing. I was supported well at home. I could grow up there in peace and quiet."

Did you ever have a normal job?
"Yes... I used to be a cleaner for a while and I worked in greenhouses. Potting plants. I also liked to babysit at the neighbours' house. But I never worked in a factory. I did temporary jobs in the summer holidays. When I left art college "Kids in America" was suddenly successful and my teenage years were over."

Your latest single also did well in America. When will you focus on that country?
"At the moment I can't begin to think about America. I am so busy with the live tour and can only do one thing right. I'd rather have one victory than to fight two fights and lose twice. When I compare my popularity with that of Joan Jett or the Go-Go's, I'm nowhere yet. But it doesn't mean much to me. I don't look forward to being away from England for months. I really love this island. But it doesn't mean that I'm afraid of success, not at all. The bigger it gets, the better. But I don't lose any sleep over it. When something keeps me awake, it's something personal, not my career."

Are you as cool in relationships as you are professionally?
"Er... I think so, yes. I mean, there's nothing spectacular happening in my private life. I have the impression that I've become more of an adult in the past year. Much more selfconscious. I'm not about to lose my cool whenever I see a cute guy."

You used to talk about wanting to write songs yourself in the future a lot. Any progress?
"Hardly. The tour started just after the second album and I really haven't had time to think about that. That will change, though, soon. I've bought myself an appartment and I'm moving soon. I'm not planning on buying sofa's and TV sets. I want furniture that enhances my creativity. A piano is already there, I only have to get a tape recorder."

So you are going to live alone, we understand?
"I simply haven't found anyone yet with whom I'd like to live together. None of my friends either. I'm not anti-social but I do like to be alone. Which is not the same as being lonely. It could be that I'm relieved when you stop by in six months from now. "Finally someone to talk with", you know the feeling. I have always lived at home and I am used to the noise of children and pets. So it might need some adjustment."

You won't be home that often...
"You're right. I usually sit in the back of a car, or travel with a plane from hotel to hotel. I do like a full agenda, though. When I have nothing to do, I go to the fridge or the candy box. Which is why I like hanging around at home. My little brother and sister have creamy bars of chocolate lying around everywhere..." 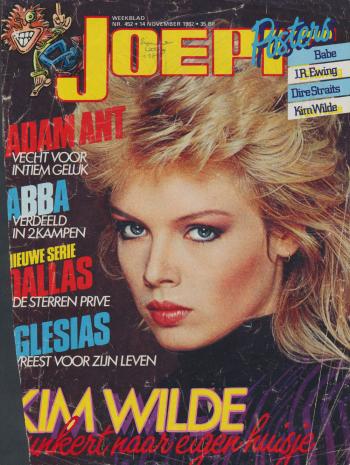 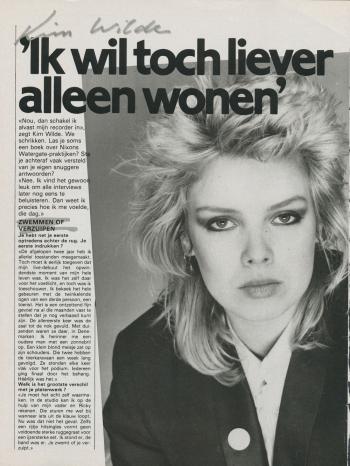 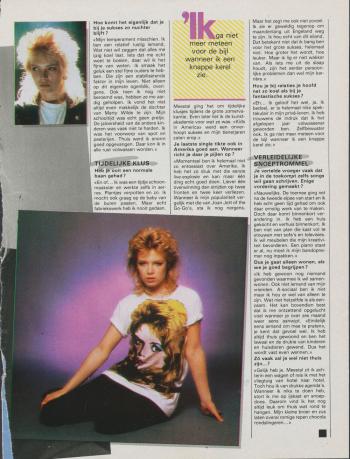