Is it possible to fall in love with a Scorpio? Some hundred thousand men would like to, if with the scorpio just the star sign is meant, and the person of Kim Wilde.

When you get to know her, you know why. This is not just some blonde who happens to look nice, but a sensitive, highly intelligent and still (despite all the fuss around her) natural person. She knows what she says and she doesn't say anything she doesn't know. No bluffing, no arrogance and seemingly an easily hurt person - even when she says that she can't shake off things easily. Fear and sorrow only come from her figure: "As a teenager I was - or so I felt - very fat. And when I have problems, I still like to eat a lot... I have to watch that."

Besides the size of her body she has had a happy childhood: "Mum and dad had an artists' marriage. Despite this family life came first. Dad toured a lot with his band. Mum has also performed on stage sometimes. But there was always one of them at home."

Her father was and is Marty Wilde, a successful rock 'n roller in the Fifties. Mother Joyce also sang. Despite these role models Kim would have nothing to do with singing at first: "I liked drawing and painting. Portraits, landscapes, this and that. And I wanted to become an actress. That's all still inside my head somewhere. I often get irritated about success, it takes a lot of time. Television, studio, interviews, promotion. For the new album I went through all the capitals of Europe. There is little time for hobby's such as painting and acting. I do scribble a bit on a note pad sometimes."

The job eats her up, timewise. "Yes... and no. When it gets too much, when I would take too much time singing, I would stop immediately! I like the small beauties of life too much."

One of such small beauties is her small sister Roxanne. Kim loves her very much. She carries a photograph of her with her, and she shows it often once she's gotten confident enough that she can trust you.

Yes, Kim is a bit mistrustful in many ways. "Many people only talk with someone, because they want something. There are many different reasons and one has to be careful, one has to learn who to trust. I mean people like Steve Strange from Visage,  who allegedly had an affair with me: he needed promotion and - damn it - they've given it to him. They simply wrote that I was involved with him and it simply wasn't true. But no-one asked me. The story simply became popstar loves popstar! Laughable. Also these strange episode of me and Adam Ant. Now, I can accept Adam Ant a little, but Strange... heaven help me!

But aren't these stories also promotion for you? "If I was hellbent on becoming the Elvis of the Eighties, maybe. But I don't like it. It's the method to break people in showbiz. That won't happen to me." But it does anger her. "Yes, no. Maybe. It's disgusting when you need to depend on the fairness of others. I hate things that I can't control myself."

Does this also mean her real boyfriend?
"Hm, no, I am not a dragon. I believe in the equal partnership. Besides, daring, I don't have a boyfriend at the moment. I am happy when I can read a few books, roll around in the car and visit friends. When I have time for a drink in the pub, or spend some time at home with the family. Sooner or later I will find time for other things. But as long as I have this profession..."

I give her a few keywords, for her to speak about spontaneously:

Sex: "When I say something about that in an interview, certain people will tear off my head!" (laughs)
Falkland: "Same thing, I don't dare say anything about this sh..." (a sad, pensive face.)
Politics: "Really interest me. My father is also very interested in politics, I came into this at a young age."
Emancipation: "Has to be. But on both sides."
Environmental protection: "I'd like to breathe without a gas mask in the year 2000"
Music: "Everything! Elvis, Chopin, Beatles, mostly it's good (!!) music."
Wish: "I'd like to say, but just privately. Please don't publish, it embarrasses me." (It's something to do with acting!!)
Biggest fear: "A final war. Sickness. Misery, for me and others."
Life: "I'd like to get old. Marry a very normal man. Have children. Live in peace and quiet. And - I admit - not having to mind money." 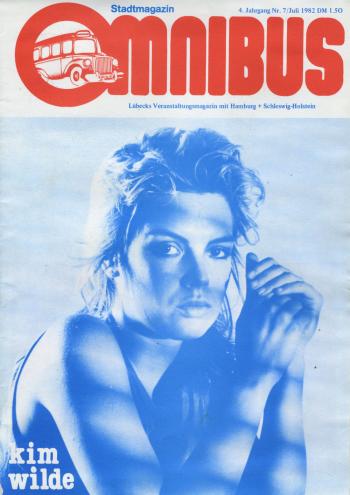 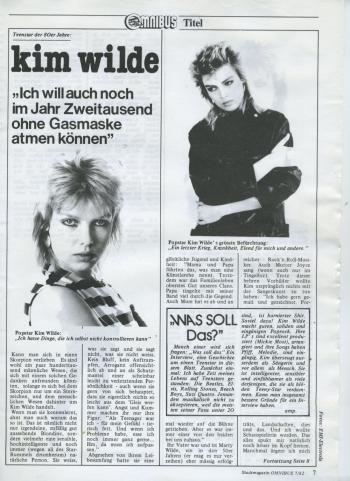 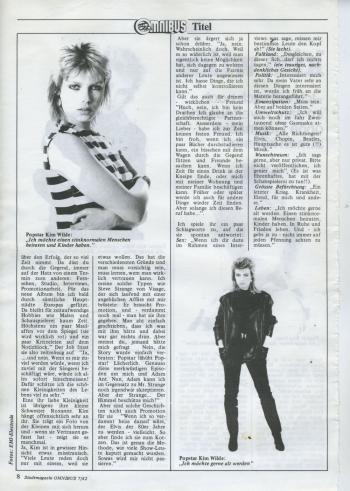