Two days after the winners of the Popcorn Star Awards 82 were announced, our London correspondent Gabriele Sneddon met Kim Wilde for an interview. When Kim, who celebrated her 22nd birthday on November 18, heard of her number 1 placing, she was very excited indeed. "That is my best birthday present", said Kim, "I really mean that and I really, really have to thank the Popcorn readers for that".

In three months from now Kim Wilde (who wrote a personal greeting to the Popcorn readers above) will tour Germany - this is just one of the new things Kim told us in the Popcorn interview...

You were on tour for a total of seven weeks recently. Where did you perform?
I was in Denmark for two weeks, two weeks in England and three weeks in France, Belgium and Holland. Together there were some 40 concert, and Paris and London were the highlights for me.

You secretly didn't come to Germany...
Yes, while Germany is so important to me. That sounds a bit mad, but it is a fact. I wanted to get some routine first and sort out my growing pains on stage, before I came to Germany. This country has made me so big, and it causes the biggest pressure.

When will you come to Germany after all?
In March. And for about twenty concerts. It will be my biggest tour in one country. Then I will go to America.

So how did those first concerts go?
Just fantastic. My band and me have prepared ourselves best we could for the tour, but when you are suddenly in front of an audience, you suddenly feel insecure and you suddenly feel the risks you couldn't see beforehand. But the audience went along very nicely and also knew all the lyrics - I didn't expect that.

Describe the feeling you had during the first performances.
I was of course terribly nervous. It was helpful that my parents were there, that was something of a saving grace for me. But during the last few minutes before going on stage were always terrible. My mouth would become totally dry - which is why I always have a 2 litre bottle of mineral water on stage.

Does the stage fright subside once you are on stage?
No, not right away. Usually just after the second song. Before, I am in some sort of hectic trance, where I do everything quite automatically and studied. I hardly look into the audience, just to my band, it gives me some security. Afterwards I can hardly remember the first few minutes of the show. Thank God this tension goes by in time, and when the first song is over and I feel that the music comes across.

On stage you move - just like the band - rather punky. Is it rehearsed or something that comes from inside of you?
Whether it is punky, I don't know. We have a lot of temperament and we let it out. Nothing is rehearsed!

Is my impression corrent, that you enjoy the fast, more aggressive songs like 'Chequered love' more than ballads like 'Child come away'?
Absolutely. I was not very happy with the choice of 'Child come away' as a single. In future I would record reinforced up-tempo songs with lots of power. My next album, which my father and brother are currently writing songs for, and which will be released in February, will reflect this.

Have you styled your looks more aggressively, accordingly?
No - the way I look now is the way I am! Before, I couldn't see my audience directly, just the photographer, who wanted to make nice photographs. That's how those beautiful pictures of me came together. But I am not a beauty queen, I wanted to be a personality. And I can only show the way I am really during the live shows.

How will you spend Christmas?
Before Christmas I will fly to a sunny place for ten days and have a holiday, because the tour has really exhausted me. I will be back home for Christmas, and will celebrate it with my family as always. See lots of friends, watch movies on television, and drink lots of rum punch. In England Christmas is celebrated very intensely.

What are your plans for the new year?
I will finally move out of my parents' house and move into my own place in London. My room, which hasn't become bigger since my career took off, has started to look like a jungle. When the moving has taken place I will prepare for my German tour. I am already looking forward to it! 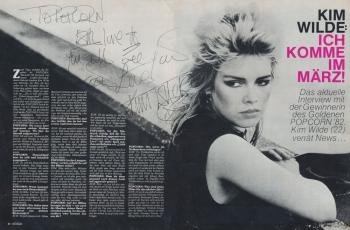