Cambodia in English, in the Netherlands we used to write 'Kambodja', but nowadays it's called 'Kampoechea'. It's an exotic country in the Far East, which has been the stage of bitter battles for years. Weapons, death and sadness: Kim Wilde sings about it on her new single, which is very different from her previous hits, 'Kids in America' and 'Chequered love'. A new Kim, now that she's in Cambodia?

'My problem is that I feel like I can do anything', the blonde singer tells us. 'This gets me into trouble sometimes, but if that will happen with this musical change of direction, I don't know. It's music I like anyway and that's the most important thing. The album has to be released in March and then you will hear what I mean.'
Does it mean that Kim will do a tour? 'It does. And I'm looking forward to it. I feel like I can state a lot better what I am about on stage. It's good for me too, because a tour means discipline, keeping to certain schedules, and I am usually quite bad at that. I could never keep to a regular nine to five job: my biggest problem is that I can't get out of bed in the morning. Such a tour will get you to learn that, otherwise things will go wrong!'
Such a tour will also reinstate her as a star. 'Yes, and I hate it. I was at the butcher's the other day and a boy recognised me and asked me amongst other things what kind of a car I drove. Well, it's a regular, old Volkswagen Beetle. He was very surprised about it, because he felt that a pop star had to live in a giant house and ride in this monstrosity of a car. I couldn't get used to that. I am a singer and I work hard for my money.' 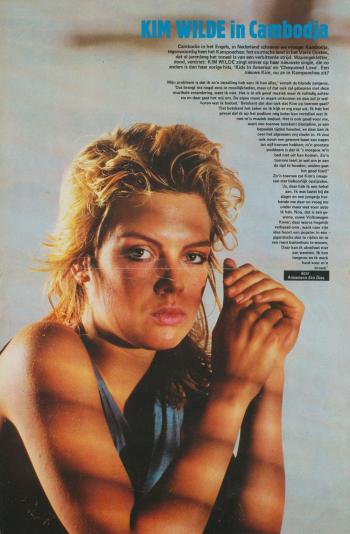