She appeared dressed in black ('My favourite colour'), with bitten fingernails ('My vice') and a sniffed voice ('from two weeks of holiday skiing in the Elsas'). For four hours this 'longest interview Kim Wilde has ever given' lasted. In her light Cockney slang - the German parallel to this would be Berlinish - Kim Wilde (21) talked about music, men, work behind the scenes and - for the first time - about her measurings. Here they are: 91 - 63 - 90. As the most beautiful image that exists from her, Kim signed our Popcorn cover and the poster from January 1982. Why she shows herself this 'womanly' so rarely, she explained after the first question...

In London, there are photographs making the rounds in which you wear an elegant miniskirt. Is that your new look?
No, I have only worn that for this one photo session. I always wear my black macho-clothing. I feel somehow unwell, when I wear very chique stuff. Why that is, I can't really say. In my fantasy I'd like to be that way. It is fun to look like this for example on the Popcorn-poster, and I really like those pictures then - but I couldn't walk around like that for a longer period of time.

Your new single 'View from the bridge' has a mysterious lyric. What is behind it?
It's about a girl, who's had a major disappointment and wonders whether she will jump off a bridge or not. The lyric is deliberately vague, so that anyone can make their own interpretation - just like 'Cambodia'.

Did you ever experience such a disappointment yourself?
No, I am very careful when associating myself with other people. Before there could be any disappointment, there would be alarm bells in my head. Problems that really bother me are usually just about myself.

What kind of problems were these?
Until I was 17 years old, I was a very troubled person. I thought I was unattractive, worth less than others, bad tempered, jealous of others and very scared. For years I had the same nightmare....

What kind of nightmare was that?
Like in a horror movie: I was lying in bed in the dark and suddenly rats were on me. The dream was so real, that I could feel their feet on me. I lay there motionless and waited until the rats would disappear again. A psychologist told me, that this dream is a typical sign of extreme uncertainty and fear.

Do you still dream a lot now?
Yes, but now they're usually beautiful dreams. My last one was with Adam Ant (laughs), but I won't tell what happened...

After Steve Strange the English press is writing about your affair with Adam Ant...
Only because I said once, that I have a good time with him. With Steve Strange I was only out to dinner once. I am in hindsight very naive and fall out of the clouds when the big stories are in the newspapers.

Is there a man in your life right now?
No-one that would make me sacrifice everything. I have been friends with Bob Kingston, guitarist of the band Tenpole Tudor for a while. Yesterday we were at a party together. We have a good time, but the big love of my life he's not. At the moment everything is focused on my career anyway. But I keep my eyes out for the right guy.

Did you change your negative outlook on marriage?
No, I am sure that I will never get married. It is so unavoidable, to have to give yourself up in a marriage, and that isn't for me. I have friends who changed totally after they met a new boyfriend. When I see something like that it makes me shudder.

Are you secretly a feminist?
The principal idea that women should be equal to men in all respects is okay with me of course. But what has become of the whole emancipation movement? Many women have misused it, made it ridiculous and vulgar. Because they do not want to be equal to men, but better than them. I think that's idiotic.

Is there anyone who represents your ideal image of a woman?
That is the maid of Orleans, and Marilyn Monroe. I go between these two extremes - for the one I admire the power and heroism, for the other it's her charisma and her looks. I like to watch beautiful women. There is no photograph of Marilyn Monroe that doesn't look breathtaking. I am photographed so often lately, that I understand just how great Marilyn Monroe must have been.

Are you still living at home?
Yes, but I have looked at some apartments in London. They were too cold and modern. At 16 I really wanted to move out and now, at 21, it seems oddly hard to do. My mother still wants to know 24 hours a day where I am and what I am doing...

From the start you have been working with your father and brother. Isn't there any tension in the family clan?
When you read in the papers 'Singer strangled for singing off key', then I was the victim and my father the perpetrator (laugs). No - at home there are no problems because of this.

But one hears that in the studio there are tensions...
Yes, sure. I have to explain, that we usually record a single in a day, an LP in two weeks. That is unusually fast - other artists work for weeks on a single, but it gets on my nerves and does't work. We get into the studio and then there is of course a tension, which is good. I work best when I am under time pressure and angry. And my father knows exactly which buttons to push.

Do you want to betray, how he does it?
He talks with me like I am a child and then says a few nicknames from when I was young, which makes me go through the roof. But I won't tell these nicknames!

Steve Strange has said that he admires that you know what you want. Is that right?
That really surprises me - I would rather say that I know what I do not want (laughs).

What you apparently don't want, is to tour. You have announced live concerts, but so far they haven't come true...
That's not really fair. I have always said that I would truly want to play live. But my father Marty and my producer Mickie Most, which I listen to very much, have so far advised me not to do it. I have supported my dad as a teenager and sang backing vocals for him, and I have experience how sad such an appearance can be when everything isn't quite right.

When will the first concert by Kim Wilde happen?
This gives me the jitters. I am in a crazy situation, because I am very successful as a singer on records, but I haven't sung live at all yet. I can sing, that's not the problem. But the band, the light and the show are still a worry right now. But: at the end of the summer it will happen. And I will probably play in Germany first.

Do you have any example for your live show?
No, I don't go to many concerts and don't know a lot. I've seen the Clash, Adam Ant, Madness and Toyah, but they all have a very different style. 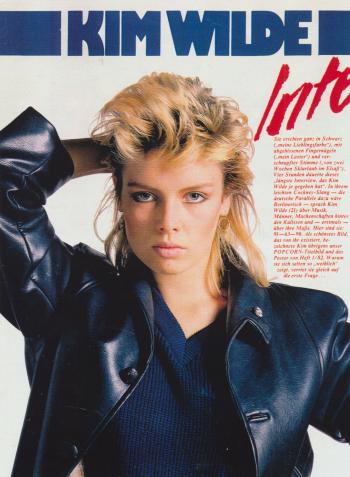 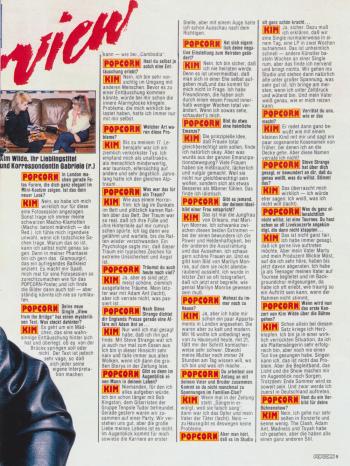