Kim Wilde is owned by everyone

It is not an ideal location for an interview: a dressing room of the NOS studios. But there is too little time anyway to have a quiet conversation with Kim Widle: the interviews take place just before the recordings of Avro's Toppop in which Kim will perform her new single, 'View from a bridge'. She is busier than ever: the promotion for the new single and the rehearsals with the band with which she will take to the concert stages soon. Kim Wilde has become a star. How does she experience that? Just enough time to talk about the new album, women in pop music, being popular, her tour plans and the family business Wilde.

While Kim is trying to make herself even more beautiful than she already is with make-up from a ridiculously small beauty case, I try to find out why it took so long before the first album would come out.

It has taken a long time to make that album, hasn't it?
Yes, we started ages ago. When you spoke to me in London last year, I was in the studio, and that was, when?

September. More than six months ago.
That long ago? There you go. And then I was already working there for a while. It took a lot of time, but it was because we weren't getting into the studio for an album. We were recording new songs, and searching for a new commercial sound. That eventually led to an album, and that was good because it had to come anyway after all the singles. People were waiting for it.

That does mean that you, your father Marty and your brother Ricky did find that new commercial sound?
I do think so. There aren't really big musical changes in direction, but we did get closer to the definitive sound. Using more synthesizers, and more drums is an example of that. It didn't turn out to be an all-synth album, it still sounds very 'rocky'.

That is an important part of your music, isn't it? Rock 'n' Roll?
Absolutely, and it always will be. It is the basis of my music.

Will that also be on stage, when you go on tour?
Cartainly. We are getting together a band and that is going really well. Most of them are friends of ours, but I can not name names yet, because it isn't definitive yet. But we are rehearsing. I don't know how long before we go on tour, but I don't want to wait for too long.

You once said that performing is one of your biggest wishes, but it has taken some time to make it happen.
Yes, but I want to do it in a good way. There is a big difference between studio musicians and live musicians, you know. I wasn't ready, because something like this needs a lot of preparation. But it is going to happen soon.

Do you think you are ready for it?
I am. Within a few weeks we can start. I want to give something back to the audience, to go on stage and say thanks for buying my records.

Are you going to do a big show?
Well, it won't be a big theatre show a la Kate Bush, but it will be dynamic and have a good vibe. The presence of an artist on stage is something fundamental for me. Someone like Elvis Presley was really there, he came across to his audiences. I want that too.

You used to say that you are shy. Aren't you afraid of the thousands of people you will get to confront?
No. It's not the best word, 'shy'. I keep to myself, certainly. But as a stage artist I am different, more open perhaps. I like people and that's why I look forward to the live shows.

You won't have a lot of time for a private life, I presume.
No, very little time. When I have some time on my own I listen to music, like Abba or Elvis.

You have become public property in a way. Does that bother you?
No, I accept the fact that my life has become part of the lives of my fans. It comes with the job. But I won't look it up. I would never go shopping in London on a busy Saturday afternoon. I prefer monday morning. I hate shopping anyway, when I need something I just go to a shop to get what I want.

I don't think you can go to the centre of Amsterdam for some shopping.
No? Well then I won't. There is a big difference, by the way, between being recognised on the street and being bothered. I don't mind giving my autograph.

Do you mind that women in pop music are being treated differently from men?
I don't. I don't think there is a lot of difference. Physically women are no less than any man and women buy as many records as men do. I know that the music business is a man's world, but I didn't get into trouble with it.

The fact that you have good looks does help of course.
I don't know. The Rolling Stones aren't very goodlooking either.

I thought they were men?
(Laughs) You're right. You're probably right: it does help when people like to look at you. But the music is number one. The audience isn't crazy, they see through a pretty face rather quickly. Look at Abba: they look fine but I don't think they would have had the same amount of success if their music wasn't so good.

Do you still listen to Abba?
Yes, I like their music and when I was younger I always wanted to be in Abba. I wanted to look like Agnetha. There were a lot of elements that attracted me to Abba, especially their stage presence.

If you were to do you life all over again, would you do the same?
Yes, especially knowing what I know now: that I've been very lucky. I have a good life. Business interests are being taken care of, dad, Ricky and my mother take care of that.

It is a family business, isn't it?
Yes. It is called Big End Productions and we are planning to include other artists in the venture. I was born lucky, I think.

The intercom calls for Kim to get to work in the Toppop studios. When we say goodbye and I wish her good luck she says: "I will return soon".
"A special place in your heart for Holland?", I ask, and she replies: "Amongst other countries...". I can imagine that: Kim Wilde has become the property of half of Europe. And she doesn't mind. 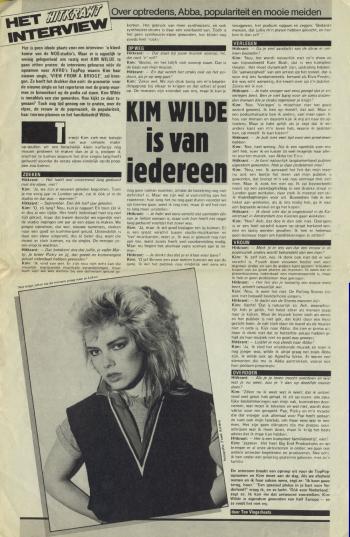