"Let's see you down here, everybody", suggested Kim Wilde politely towards the end of a long set. The angelic crowd of mid-to-late twenty year olds (mostly couples fresh from a meal at the local bistro) filed neatly down the aisles as they weakly punched the air and clapped along. No ripping up the seats tonight!
From the opening number "Chequered love", one shrill song led quickly into the next, as Kim wiggled about in spray-on-black leggings and stiletto bootees. She grabbed the mike stand like a female Rod Stewart, keeping one eye firmly on the guitarists that flanked her and nervously waiting for cues which she occasionally missed.
A surprise came when she briefly took over keyboards from her brother Ricky and showed her worth as she accompanied herslef on "You'll never be so wrong". A pity it wasn't for longer as it added weight to her performance.
Kim Wilde might lack the ability to control an audience due to sheer lack of experience but to sing 18 songs on the trot in your first tour is no mean feat for anyone. 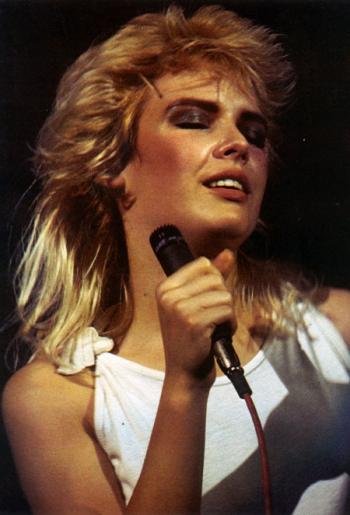