Kim Wilde: not a popstar against her own will

It irritates Kim Wilde that people thing she's become a popstar against her will, driven by her father, who wanted to pursue his own ambitions through his daughter. Or a photo model, selling the music made by her brother, a pawn in the hands of vicious London salesmen. Kim Wilde, sipping from a pimms ("a drink you only see in BBC series set in Oxford or Cambridge"): "Everyone seems to think that my brother Rick considers himself to be the star and uses me as some sort of extension, but the fact is, that I enjoy the side products of success, while he tries to remain invisible. In the beginning he enjoyed playing Jack Nicholson in videos, but now he prefers to stay at home and write songs with dad."

Aforementioned dad, a rocker of the calibre Cliff Richard and known over here as the singer of "Abergavenny" at the festival in Knokke, used to be a competitor of Mickie Most, the brain behind the careers of a.o. Sweet, Mud, Smokie and Racey. Throwaway acts which Kim doesn't feel any connection to. "Mickie has the reputation of being a dictator, but I see him as the captain of the ship. He undoubtedly has the talent to give artists the artistic kiss of death, but only if they don't have the discipline to do their job properly. All the artists you mention depended on other songwriters; I can count on my father and brother. That's an important difference."

Kim laughs out loud during the interview, crushing the image of the sombre British minimum wage girl. "I only look so serious when I sing my songs. I can hardly grin while I sing about Cambodia, can I? I like to laugh privately and I don't bend myself overbackwards to look seriously during photo shoots, but there's not much to laugh when I'm doing them."

Kim, who doesn't write songs herself because she feels she doesn't have much to say while she's only 21 years old, is happy to have proven with three world hits and a platinum album that the lyrics of Marty were as good as she thought when she was a kid. "To me he was never a certified 'has been', but an extraordinary songwriter who couldn't get a job. Every time I saw Cliff Richard on TV, I thought very bitchy "I can do that with someone else's music too." Now that I've joined the club I have nothing but respect for Cliff, of course. There's been no revenge or anything. Dad isn't extreme enough for that. He had my mum, his four children and his music. He still has all that, plus success. He always reminds me how quickly it can all pass, and he always tells me the same story. The only thing he ever wanted was to keep the house where we were so happy. He managed to do that by working very hard at cabarets, where old rockers have to work until their pensions in England. He doesn't have to do that anymore. Ricky and I will do that for him now. " Kim laughs again... 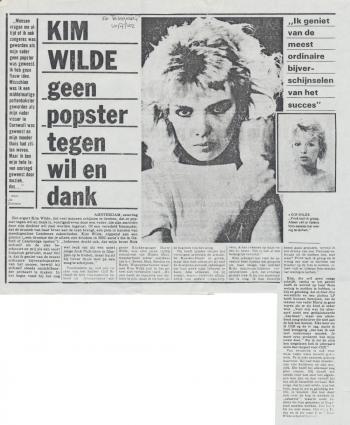