Despite photogenic poses and targeted family promotion, the 21 year old Englishwoman does not want to be a retort product. The feared one hit wonder, is developing into a long-lasting fire. And also the days of the playback are counted: for the autumn, the first Kim Wilde tour is on the program.

Greasy-eyed pouting, stiff-eyed look, shaggy pony, her fists defiantly rammed into the pockets of her jeans ... FLASH ... Kim Wilde, the noise gel, the innocent sledge, the finished instant pop dream, created for Bravo and Woolworth, Advertising, without blemishes and tricks, more trivial than Dallas or Depeche Mode.
And now... tears open the curtain, forgets the hype and the hysteria, forgets lightning and ballyhoo, glamor, glitter, tinsel ... It's eleven o'clock, and Kim Wilde looks as if she had just fallen out of bed - uncombed, unpainted and undeveloped. She yawns a few times, demonstratively, her head stiff, and brings hardly more than a tormented smile.

After all, you leave us alone. No promo aunt intersperses when the protégé is entangled in contradictions - and Kim himself seems to be worried about producing her otherwise radiant façade as unaffected as possible. She is open and heartfelt, a little timid and shy, but she does not mind, especially when she talks about her own healing world - and she loves to do so passionately.

Every responsible person asks, of course, first ... how many love letters and marriages are fluttering on the table every day?
"Less than you think," she smiles somewhat insecure.

What is your favorite actress?
"Oh my... I can not exactly answer that at the first moment, hmmm .. I like Monroe quite well ..."

I risk a side blow. Is Kim Wilde not gradually getting sick of this whole sensation-gossip stuff?
Kim reacts astonishingly, striving for the best possible formulation: "For many, especially for the teeny magazines, I was from the beginning only the dachshund blonde, a will-beaten, creature out of the retort ... such a pre-pubertarian pin Up, you know already ... Sure, you just let someone go with glacé gloves and you'll ask questions like an infant child who still plays with dolls. "

But you enjoy all the hustle and bustle about your person?
Actually already. I like to talk ... most of all about myself. And I can usually win the stupidest question for fun - sounds silly, huh? - at least as long as I have the feeling that my opponent takes me for. "

Can Kim Wilde, with her 21 years of age, still put herself in the position of shrieking teenyboppers?
"And finally, I've been standing up for a Gary Glitter autograph for quite a while, spending all my pocket money in Gary Glitter high-gloss posters ... I was, of course, in my fan club too!

Why just this untroubled and giddy Gary Glitter ...?
Lord, how can I tell you this? I just worshipped him idolatrously. He had all that I could ever dream of. If you are really shed, you can see the whole world through a rosarote glasses. "

Was your life so terribly boring at the time?
Well, not very spectacular, anyway during my school days. I was just terribly bad (we discover first similarities!), Besides undisciplined and ... oh, let's talk about something else. "

Kim Wilde's first album, to be precise, the first album of the Wilde family - Daddy Wilde as an administrator, brother Ricki as an author and Kim as an Amazon - was an equally captivating and threadbare piece of trash pop, a record just like the most naive and Most illustrious dream dancers. The Wilde family reduces pop to its essential elements and prepares it for the basic instinct, for the mass, as ephemeral, interchangeable and polished polymorphs.
And 'Kim Wilde' is simply the most dreamy and vulgarest, smartest and most carefree collection of hits and flops, clichés and killers, flutes and fillers since Blondie's Parallel Lines. Which script Kim is pushing into the hand, actually plays - until today - no role. Or more precisely: Rikki's verses remain consciously anonymous, they are loosely mobbed together and absolutely unimportant. The grandiose "Kids in America" is a dazzling example: Ricki juggles with staff and mocking, everything is looking for a shitty refrain ... "and then suddenly it rang," laughs Kim. "With the kids in America, lalala ... sounds great, does not it?" "Impression of someone who has never been to America."

Is not Kim really just interpreting the songs of her Brunders?
Admittedly, it can be a bit frustrating at times, she says thoughtfully, pausing for a moment, then continues decisively, "but as long as I'm in harmony with Ricki and Dad, I do not care who writes now, Frank Sinatra Has not brought his own song together in the meantime - and he was an insane good singer. Or think of Elvis, hmm ... it's enough to be a great singer, enough, do you understand ...?

Are you still the guarded and protected maid with a strong sense of family ...
Nonsense, I can do and leave what I want, interrupts Kim slightly irritated. In addition, I am just thinking of moving out at home, but that will not affect our family-internal cooperation.

The Wildes are, in fact, a model family, a modern version of the Waltons or Osmonds, without quarreling and intrigue, and with an enviably perfect functioning division of roles. Everyone plays his part, all pulling the same string. Daddy Wilde, a former rockabilly star, and her mother, who manages her own publishing company and manages Kim's royalties, relieve them wherever they can. Brother Ricki writes, arranges, plays guitar, and composes Kim's backing band.
The fate of the Wilde family, on the other hand, is in the hands of another family business: the RAK label by Mikkie Most, who earned himself silly and stupid in pre-punk days with his androgynous super softies (Smokie etc.). Most, the teenybop-serialfabrikant, who is now directed to a photogenic model from Wolkenkuckucksheim in good manners ... and you will not get rid of the suspicion that our nesthook from Herfordshire ... Stop! Never call Kim Wilde a Fliessband product! It completely eliminates the standard stiffness, the inarticulate coolness, the clinically-calculated lack of expression of the early 70s Schmock-Rock poseure. Kim's pop sounds often interchangeable, sometimes even stenciled, but in their best moments ('View from a bridge', 'Chequered love'), their natural impartiality and ignorance of life's shadows is simply too good to be true.
Does Kim really feel comfortable between Nick Haircuts Pelican West and Clares Pinky Blue, between all our new pop skyworms, who are fortunately more at home in Abba than at AC / DC?
"Wow, what you can rely on ... Pop, that is ... my religion, my whole life, I taste the glamor, although for us behind the scenes there is not much left as much as some people want to suggest. "

You can be a part of your career - TV, world travel, endless interviews, photo sessions ...
Honestly, after our first album I was ample confused. Private life futsch, supervised 24 hours a day and pushed around. But this first crisis has long since passed. Today I even find pleasure in all the drudgery, hmm, I do not know exactly why. Annoying that I miss so much. But every thing has just two sides "- she leans back and giggles a bit theatrically -" and I am financially independent today, every Ta was somewhere else, was five times at 'Top of the Pops', is recognized on the street ... Hey, that's something! "

Do you tell Kim Wilde how she is most effective in how she is going to move around the camera?
No! Damn it, I'm not a child any more. We did not hire a dance teacher and look at me - my training pants, my T-shirt - this is the only dress for two days Germany! "

Just do not say that style plays with you only a secondary role ...
Not again. But I do not waste too much thought on an ultrachices occurrence. There are just too many stupid guys whose ego and image is made up of clothes. I just try to be as I always was.

Where Kim Wilde comes from, is actually as insignificant as the question, where she will land once. As long as they do not deprive Mum & Dad, Ricki & Mickie of their illusions as long as she throws on her singles and videos with as much verve and conscience - as long as Kim will have the opportunity to enjoy her happiness. What she has achieved, her family teamwork almost fell into her lap almost overnight.

And at the moment she feels like, just like Alice in Wonderland ...?
Greatly formulated. But Alice had freckles, didn't she? 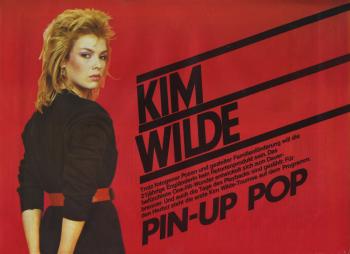 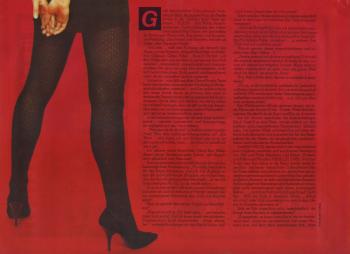 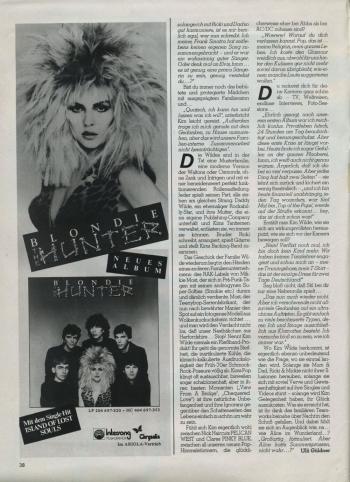