Douai, a depressing city in Northern France, twenty kilometers south of Lille, you know. Saturday night, all dolled up and 'no place to go'. Although, when you leave the highway you pass a bridge plastered with posters for the performance of Kim Wilde at l'Hippodrome. As it were. When the luxury car of Belgian promotor Paul Ambach halts to ask for directions, various doors of the houses open as through a miracle. Fingers point. Before the building a huge square of parking places. At the entrance - it's seven o'clock - a group of fans.

A degraded, round hall, which resembles most a renovated church, it appears later. With acoustics that don't really deserve their name. On the stage Kim Wilde is doing soundcheck. This must be the twentyfifth concert she's ever done, give or take a few. And on the eve of a Belgian mini-tour. There are negotiations with mum Wilde about interviews. Little interviews, eight people are granted five minutes each, Ambach said. Well, during that time I can sit on a chair and lose my blushing cheeks and that's it. If we want to come back in an hour. Kim goes to the hotel to freshen up and then it's possible. Of course not, in the end there are two improved small press conferences. During ours she said, if I remember well: I am glad to finally perform in front of my fans, I love Hank Williams because I got to know him through Elvis Costello, I have no immediate plans to perform in a musical because there are no good offers, the response to my concerts has been fantastic up until now and I expect the same from Belgium. I waited this long because I wanted to have enough material that people would recognise and with two albums that's achieved and no, I'm not disappointed because Child Come Away flopped more or less in the UK, because (a) it did end up in the charts and (b) it is not really necessary to be in the charts when you see what does get in there at the moment. After which she laughed and mum Wilde instructed the coordinator to bring in the next lot. Kim, still a doll, I thought.

In the hall things were warming up, meanwhile. Not sold out, not even full, but very enthusiastic. Quarter past nine and the intro of the concert is started: the instrumental reprise of Cambodia. And then, those synthesizer sounds, Wilde appearing and Chequered Love, a courageous start, because one of her best pieces. Immediately followed by another strong moment, Water on Glass. A first finding: this is a strong band, a bassist, a guitarist, two backing vocalists, a synth player, keyboards, saxophone now and then and a very bouncy drummer. And then Wilde herself of course, who will have a difficult time midway through the set, because she loses her voice and doesn't have enough good songs, but who does it all terrifically. Moving, skipping, minimal contact with the audience nonetheless, but she seems created as if she is destined to evolve on rock stages. Mum Wilde in the hall is nodding. The brakes are loose. Such as the jacket. A doll maybe, you think, but a doll with power. Her music also shows it: played well, almost nervously, and sometimes a little loose, but it's high level powerpop. Take me tonight, Our Town but also slower songs like Just A Feeling (a brilliant vocal highpoint, well arranged too) or You'll Never Be So Wrong, very close to the version by Hot Chocolate and with Kim on keyboards during some passages. View From A Bridge of course and then the jacket is loose for the finale, for those who are not completely convinced. It has to be said: I'm not sexist, I thought, but: this was a juicy thing to look at. My favourite song, she said, and that was one with lots of doo-doo-doo-choirs. When the Boy's Happy. A great version of 2-6-5-8-0 with an introduction of the band and a happy birthday for brother Ricky, to finally end with Cambodia. An encore, then, perhaps because there was a fear that the audience wouldn't ask for one: Kids in America, extended for this occasion. Wilde has made the step from charts to the stage with fervour and it looks like she will become one of the most attractive female performance in the coming months (years, perhaps). 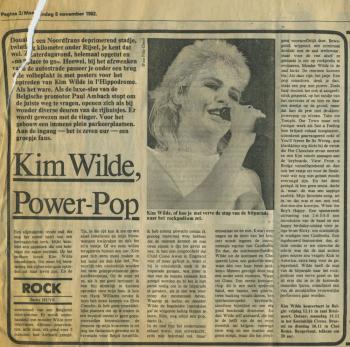