Kim Wilde premiere a huge success: "It was like a dream!"

Warm Up Gigs in Denmark were announced at short notice before the October UK tour. The Danish way information is, however, now reaches so that the Falkoner Theatre's nearly 2,000-seat stadium is sold out.

The lights dim, Kim runs behind the band on stage, the audience screaming and Chequered Love will open the concert. Black clothes - offers complete access to denim jackets and patterned T-shirt - tight tight black trousers and black heels Kim moves in a lively and warm up the audience quickly. Kim's hips moving rhythmically weight shifts from one foot to the other back towards the audience. In another, especially manly singer, Kim's mannerisms affect. But Kim is so fresh, that this does not happen, and boys and girls alike flocked to the stage on the front row.

The two background singers on stage, including a total of nine memberss and a band playing hefty sounds. The lights along the top of all is the last and this not a matter of warm-up, but the full issue. 75-minute concert material is Kim's albums familiar to modern pop, the last consultation of the biggest hits Kids In America, Cambodia and Chequered Love as well as new.

Praise to the public

Fantastic. Public input was just as important as ours, the gigs are mutual influence. It was great how the audience sang along with the song, Kim praises satisfaction after a successful concert. In Denmark Kim and her band give a total of six concerts - Kim's first gigs where she herself is the subject of most attention.

- I am very satisfied. We learn from each night more than a couple of weeks of rehearsals. Pre-tour I did not know what will happen, because it will only be in front of the audience. Of course, mistakes will be, but fortunately it has not turned up much, Kim laughs happily. Strange first concert felt, but I do not really know how to describe the feelings, because I had never experienced anything like it. It was not the horror ... but something like that. Without a doubt, I was excited but it was more than that. When the audience was inspired, I could not believe my eyes and my ears. I followed the situation in a way, on the side - as if it was not me but someone else. It was like a dream where everything is happening to someone else and myself to stand and watch.

Before the tour in England

Gigs, Kim wanted to do as early as when the second album was released, but the record boss Mickie Most advised to wait until Kim has two albums behind him.

- Mickie was just in right in saying that there should be enough songs, otherwise it would have been enough. I did not want to present covers and now all the songs heard are mine.
Now that Kim debuts live she is celebrated as a big favorite with concert also sets tough expectations. But the effort has been expended and exercises liked so much, that success is undeniable. Kim has proven to be more than just a video star and its ability to communicate with the audience face to face.
Kim has amassed his band mainly worked in the studio musicians, each of which has also experience in different bands.

Kim's brother composer-producer Ricky Wilde plays keyboards and guitar, Graeme Pleeth keyboards, Steve Byrd's solo guitar, Trevor Murrell drums, Mark Heyward Chaplin and Gary Barnacle bass saxophone.
- I nearly fainted before the first show, Ricky Wilde acknowledges the initial stress. We left the future appearances before these gigs very open, and England after the tour is not over agreed. Probably we go next to the United States and Japan, but also the next album is to be completed as soon as we can, Ricky says.

1950's favorite singer Marty Wilde - who comes to Copenhagen from England for my gig - as well as the mother Joyce Wilde, who takes care of Kim's money matters. Marty, who is responsible for Kim's lyrics, has been closely involved in preparations for the tour.

- I do not know what we would have done without him. An experience not to be overlooked. No one can say how to appear on stage or how to handle the audience, but he has guided us in every possible way, Kim says.

From time to time the concert - as well as on the disc - Ricky's compositions and arrangements influenced too cumbersome for Kim's cut but melodic sound. It remains to consider why this is a smart and talented girl who cares to sing sometimes in such a boring material. But perhaps Kim looks ahead and is now, by ensuring their positions then become imaginative. in terms of their own compositions Kim's self-criticism has been high, but perhaps the most successful concerts will increase the self-confidence.

- Of course my confidence is growing and I believe that it will enhance their creativity. In fact, I'm sure. I do not want to put too much on one plate. In preparation for the tour, I have been involved in many things, such as a program, buttons and t-shirts design. I've always taken care of myself my own business and I do not want this to change.

After the concert a late dinner happens, during which the well-known British concert promoter Mel Bush proposes a toast to Kim.
- This is a young woman who has grown up tonight, Mel speaks and glasses in honor of Kim's rise.

The actual rock and roll dream shines with sparkling after this period in the hotel bar until the small hours of the morning. And will no doubt still many days to follow, because only spoken to Copenhagen birth of Kim's career for the second phase.

Kim Wilde finally ventured into the performing and action-packed world premiere in Copenhagen. Success awaits and more concerts will be likely - maybe next year in Finland. 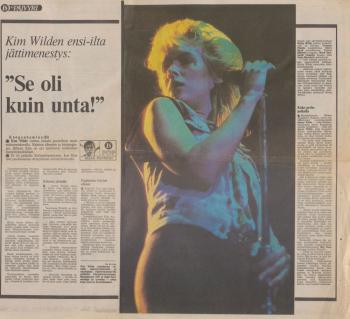