She is beautiful, even more beautiful than on photographs. With careful steps she shuffles between the furniture and sits down on the sofa. She dreamt last night, about bugs and the man who directs her videos. She asks if there's any lemon juice. And if there are any questions.

You look gorgeous, but tired. Do you think this is hard work or just having fun?
It is definitely work. And it's been hard at times, too. Especially in the beginning when against all expectations 'Kids in America' took off in such a big way. I was always pretty well protected at home and now, suddenly, a lot of things had to be dropped. My hobby's and especially my privacy suffered. I used to do what every girl my age did: shopping and hanging around. Suddenly that had become impossible. I couldn't walk on the streets without being recognised. I almost broke down mentally. Still, I am doing what I always wanted to do, which is why it is fun as well.

Do you have any idea why your brother's career failed and yours is so successful?
Dad had finished a lot of songs for him when he was only ten. The people he were working with were a lot older than he was, had a different mentality and Ricky just lost it. He couldn't handle the pressure. I can keep myself under control a lot better and dad has supported me much better. I believe I have a stronger personality. Someone once told me that I shall not bore people easily because I can go in different directions. I have more than one face. My success is a result of a combination of various things, because I don't think I would have made it this far if I had to depend on my looks alone. The music I make, the production, my appearance, it all fits together perfectly.

Is there a difference between you and you on camera?
Sometimes not at all, and sometimes there is when it's a bad picture. Photographs usually only show one facet of one's personality. They are too shallow. I can't recognise myself on some.

When did you notice you were beautiful for the first time?
I didn't think I was beautiful at all. I wasn't satisfied with who I was, because I didn't know who I was. When I was about sixteen I had my first boyfriend. He had to tell me that I was beautiful lots of times until I believed it. His pride about me gave me a sense of security. I didn't doubt it since then.

Thousands of people are in love with you. Can you describe a bit how that feels?
Amazing. And I don't give them the illusion that I love them back. They don't expect that. I don't want to underestimate my fans. It is real what I'm doing, not a dream. My friends haven't changed. I sometimes have trouble understanding what they think of me. As it is now, I can keep giving autographs for years on end. I have always wanted to be famous. I don't know why, but I had to. That belief kept me on my feet.

Do you believe that it is more difficult to be young now when compared to a few years back?
More difficult. There is an enormous pressure coming from the media and the environment which is very confusing. Violence, sex, garbage everywhere. I have also felt that pressure when I started going out. So much is coming at you which you aren't equipped to deal with. A lot of young people don't even get a proper upbringing at home anymore. Television and school must learn them everything. My parents have helped me a lot with that. Especially since daddy wasn't there to teach me a lession but to tell me more about how people work. I am very grateful for that. It is all too common these days that children come home and no-one's there.

Do you think you have to say something about that in your songs?
I am aware of such problems but I don't know whether I should sing about them in my songs. I don't know if it is worth that much. I move beyond the garbage and show that there's a different way. And to show that life has better sides.

You'd rather steer clear from feminism as well?
I have never had the feeling that I had to support any kind of movement by becoming a part of it. I am very much an individual. You have to find your own salvation and do things for yourself. I am one of the most liberated women in the world and at the same time I do things that feminists hate. They want to move out from under the pressure of men but when you have success as a woman like I have, they despise you. That is ridiculous and I can't see how that is liberating at all.

You have a little brother and sister. Would you like to have children yourself?
I don't know. I do love them but I can't always bear to have them and keep them under control. When I play with them they make so much noise I can't stand it. They ask things you don't know the answer to, bang eachother's heads to the wall or try to strangle one another. At our home we live in a family environment and it seems natural to have children around. You learn a lot. But still... You don't know how the future will plan out. Will they have the same possibilities I have had? My own childhood is long gone and I wouldn't want to do it again. I think I'll stick to 'no'.

You have strong family bonds. Do you have a say in things or does your father decide everything for you?
Dad makes the most important decisions. But that is not a bad thing because we have similar tastes. I know my limitations. He writes my songs because I can't do it. Making songs is a trade and I have yet to learn it. People do say that I should write my own songs and in the long run you start to believe it. I do have some ideas but when I sit down and try to write something I can't fit music and words together. I don't want to present something inferior. It has to be better.

Was your first idol a musician?
Elton John. I have bought all of his records. Especially his voice was great. And after that it was Gary Glitter, who is almost the complete opposite. No sensitivity, but the glittery 'here I am'. I like these extremes.

Your life was dominated by music since the beginning. Who or what do you consider to be the most important musical trend of the recent ten years?
Gary Glitter. Not because of the man he was, but because the great pop records he has made. His clothing, his sense of humour, the production. His importance is being discovered only now. Punk has also meant something for me but not musically. I became aware that I could do something like the Strangles, the Clash and Costello did. I felt something of this rage and frustration that young people of my generation had at that time. Just the political aspect turns me off.

Your name was often seen in the gossip columns. Does that bother you?
No. If you don't want to be in them you won't. Usually it's hearsay. It comes with the job and it's usually fun. When I read that someone fancies me my day has been made. I don't take it seriously. I have fun with it.

What do you think of Adam Ant? A big name?
I don't know because I've never met him, so I can't say if I think he has a strong personality or not. I don't like his latest videos that much. Jumping through windows and doors and everything... I like his early records, before he had the status he has now. Still we have a lot in common. It's the first time in English rock history that a male and a female idol are constantly in battle with one another. It seems like the new elite: you protect one another and eachothers privacy to keep your feet on the ground.

Are you happier than ever now?
Yes. Very certainly. 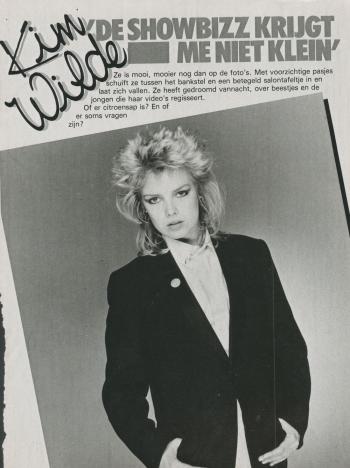 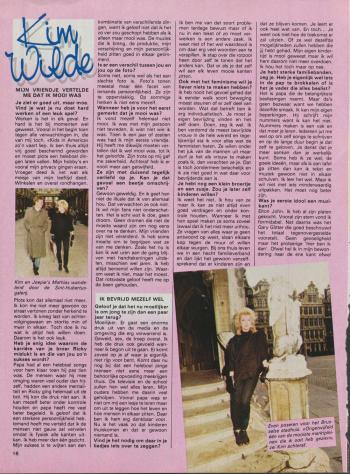 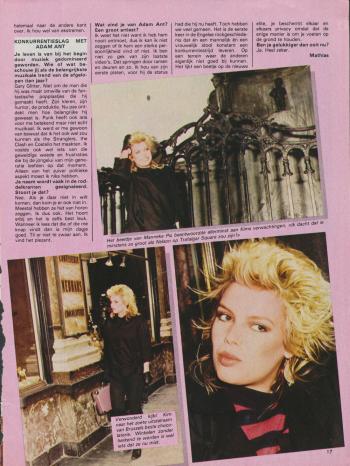