"I like rhythmic music, the rhythm aimed at dance, I love the fluid and catchy sounds but, for heaven's sake, nothing to do with new romantics and those scenographic paradoxes!"
The speaker is Kim Wilde, a character that Italy has only recently discovered but which enjoys, in most of Europe, a moderate success. Blue eyes blonde mop, pleasant and captivating appearance, Kim is keen to distance herself from the resurrected phenomenon of dandysmo, which in her homeland, England, has reached peaks of unexpected consensus. The music that made Kim Wilde famous also in Italy is a rather elaborate and intelligent dance-music that, while winking at the most popular trends at the moment, manages not to mix in the cauldron of pirates and aesthetes of the last hour .

"Kim Wilde" is her 33 rpm debut, an album in which this pretty girl has been able to show off all her grit and her interpretative skills, while demonstrating that she has an artistic personality still in the process of maturing. The long-player, written in collaboration with his father Marty, a well-known character in the English rock scenes of the 60s, and with his brother Ricky, has received recognition from both the public and critics. Water, soap and sincerity seem to be the main characteristics of Kim, who declares herself determined to remain in the musical world as much as possible: "I think I'm on the right track, despite my inexperience. I still had the courage not to go into a current already formed: it would have been much easier to get in line behind successful groups, many people do this because sooner or later, a crumb of success arrives. Instead I think that, perhaps with longer deadlines, even my decisions will be gratified " .

Meanwhile, in addition to the success achieved by the first long-playing of the same name, Kim has already climbed the rankings of the 45 laps several times, which have seen her "win" with songs like "Kids in America", "You will never be so wrong "," Cambodia ". The extremely blonde daughter of art now aims to fine-tune her artistic image for live performances: "I am a very important thing and I am very deficient from this point of view, especially because I have never had the opportunity to have a confrontation directed with the public. " And this will probably be the test of nine for Kim Wilde who, struggling with a concert, will have to show off all the grit he is capable of withstanding the situation only with his own strength. In this regard, her years of study at Art College may also be useful. 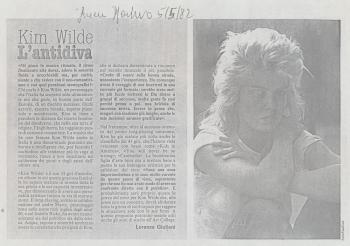