Kim Wilde, the new superstar of song, talks: "I'm in love with Adam"

In the middle of world rankings, the blonde queen of dance music reveals her "dream of love" for Adam Ant, the rock pirate. And in the meantime it makes millions to palate...

He does not have a boyfriend yet, German newspapers write, but, given her beauty, this would not be a problem. The trouble is that she has "fixated" on Adam Ant, the pirate of international rock. "I dream even at night," she confessed to her friends, "beautiful and charming, dressed in Lancillotto." And, logically, the encounter takes place not over a meter crowded but in a forest as it is convenient...

On the other hand Kim Wilde answers precise questions about Adam Ant with, "I'd love to know why I admire him a lot. "Also as a singer? Yes, he's a serious professional, aggressive at the right spot... And then he's beautiful."
Miki Now, Kim's agent, the man who has to protect her from the "sticky" assaults of mid-world fans amongst thousands of other things, would see this coupled and artistic eye. "Kim to attend a guy like Adam could do very well, rather just fine, unfortunately ...". Behind that unfortunately there is, to be gossip to the bottom, Kim's long friendship with Steve Strange of the Visage and recently with Bob Kingston of the Tenpole Tudor, grumpy group, new wave of leather, studs and metallurgical sounds like Italsider. "Steve is just a good friend and nothing else," Kim said, "with Bob I've been to some concerts. I met him with my brother Rick in Bremen, behind the scenes of the theater where Tenpole Tudor played. Nice guy, one of the many to get my hair ... "
Scorpio Kim Wilde, Scorpio Adam Ant: The encounter would be to say the least explosive. And just wait, it's inevitable. Meanwhile, Kim, in a very short time, with two very lively LPs (Kim Wilde and Select) and two 45 (Kids in America and Cambodia) is becoming the first star of America. After France, Germany and England, Kim is capturing overseas fans. Her cold and sharp eyes, her gloomy and disturbing look, her jungle queen motions, almost "white-haired" hair bounces from the front pages of tens and dozens of magazines. And everyone, as always, desperately searching for news on her account.

And is she maybe the daughter of Oscar Wilde? No, her father is not a novelist. She is a daughter of art. Her father, Marty, was a rock star in the early 1960's. The idol of entire generations, English version of the famous Carl Perkins, boasts among his fans some young men who later just gave the name of ... Beatles. With rock in veins, Kim follows the father's footsteps with the same force and aggressiveness: her musical mix is not easily labeled. There are those who define it as a dance-music, but it is a great umbrella under which the most varied genres can be repaired. Let's say that it's a danceable, well-rattled music that winks at all the new wave trends of the moment without however capturing more than that. And this is a lesson of good taste and professionalism, no doubt.

"I love rhythmic music, dancing rhythm, I love flukaide and catchy sounds, but for charity nothing to do with neo-romance and some scenic follies." A code message, if we want, to Adam Ant: its way is most likely a blind alley. "I think I'm on the right track, despite some inexperience, and I've had the courage not to put myself into a wave, in a wave that I have already formed, I did not do as many do, I did not throw myself in the wake of anyone. I want the crumbs of the successes of others. "
Determined to last musically, not to be the classic meteroa, a single summer star, Kim Wilde, 22, all "family-made" records with his father and brother Rick, points to most of his live performances. Very cured, impeccable, highly spectacular. "I really do, I know I have a lot to learn, but I'm stubborn, and then I'm not in a hurry."
Who should you say thanks to your success?
"Only for myself, especially, but I had a good time ago: enter and attend an art school, Art College. That experience is coming back to me very useful." 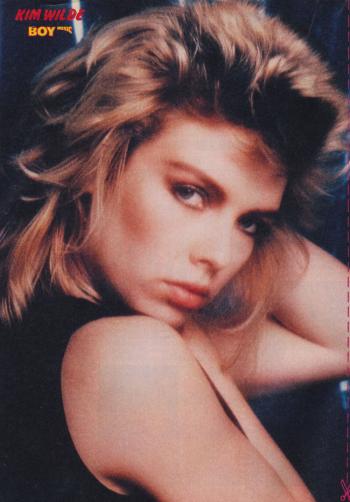 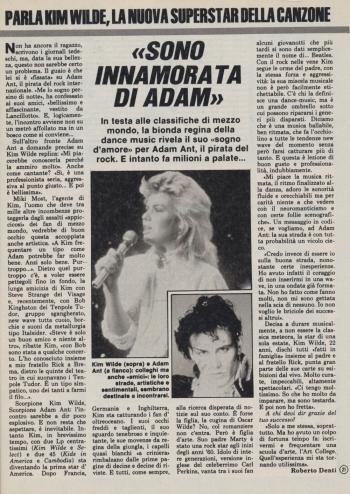