Kim Wilde: The she-wolf and the full moon

The surprising transformation of Kim, daughter of art and rock star: cold and unfriendly during the day; at night sweet, affable, lover of good wine and good food. One wonders what the real Kim Wilde is and if the surname, in which the adjective "wild" peeps, has influenced the character and a vague affinity with werewolves. Perhaps the answer may come by listening to the songs: from "Kids in America" to "Cambodia" to "Watching for Shapes".

We have seen many wolves. "Werewolves" too: beautiful and ugly stars, fierce and meek. I managed to tame several of them, forcing them, when the full moon came up, to enjoy a relaxing and well-deserved rest. So I prevented the dreaded metamorphosis from taking place and put them in a position to not harm.
When friends and colleagues told me about the exploits of Kim Wilde, the "werewolf" in question, and I listed the victims she sowed in Europe, I listened somewhat skeptical and indifferent, however not at all afraid.
I was therefore ready to welcome and calmly assault this "sacred monster", sent against us by the misty and rainy suburbs, according to the seasons, of the British capital.
Kim descends from a family of artists. The most famous is the father Marty, rock star of the early 60's. Kim left, as her parent did twenty years earlier, to conquer the planet rock. He has many weapons and arguments to get there, I can assure you.

Upon arrival in Italy, her very blond hair dazzled me and those who found us on our way: journalists, photographers and taxi drivers, hotel concierges, common passers-by, directors and television technicians. But an even more dangerous weapon turned out to be Kim's mouth: two fleshy and sensual lips that never hatched at the faintest smile, at the slightest sign of sympathy towards the designated 'victim'.
His image stood out confident and provocative among the colorful and fumigant alleys of the various television studios. The large and deep eyes, sometimes melancholy, not very dreamy and not at all suffused with dolcessa, wandered in search of imaginary and artificial moons to complete the fatal transformation. Meanwhile the voice was enchanting, like the legendary song of the siren.

The first victims were already ready and resigned. The cold, detached way of doing things did not encourage attempts at approach and conversation. In the vain hope of conquering the sympathies of being bewitched, most of them stood in religious silence, observing Kim's "performance" motionless and at a safe distance.
After that, having found some time between the television recording and a photo shoot, the singer strolled through the elegant streets of the center, looking at the shop windows and admiring the colors of spring fashion.

Back in my office, hit by a sudden (and dangerous) tiredness, Kim joined two armchairs and without any problem she curled up inside, falling asleep deeply. It predicted that this would be a long afternoon and an even longer moonlit night.
Her sleep in the office was actually not very peaceful due to the coming and going of people intrigued by that presence and induced to stay longer.
Upon awakening, I accompanied her to the hotel. Kim goes upstairs to change and I, while I wait in the lobby, book a restaurant table by phone. From the windows, I realize that in the meantime the evening has fallen, the first city lights come on and the full moon is rising in the sky, just the one dear to the transformations of the werewolves.

And here, with the moon, Kim also transforms. When the metamorphosis comes down it is already in place. The harsh and impenetrable expression has become harmonious, transparent. Cold eyes, almost glacial, have turned warm and velvety. The lips open into a smile capable of captivating the less emotional person.

Kim Wilde (in the surname there is the word 'wild') appears under a completely new aspect. At the table she proves to be an excellent conversationalist, affable and available even towards strangers who come to ask her for an autograph.
During dinner, we face a topic dear to me: cinema. Her preferences, in terms of recent productions, go to two extraordinary films for me: "The Raiders of the Lost Ark" and (look at the coincidence a little) "An American Werewolf in London". She liked the latter more for the comic aspect than for the horrid one.

At the restaurant, Kim is a good fork, curious about every culinary specialty, especially if based on fish. Unexpected, almost surprising, is her interest in wines. Her glass was never full. And I must say that if she was in a hurry to empty it, I was even faster to fill it.

A cheerful evening, therefore of those that are long remembered. Kim left, but I still have a doubt that continues to haunt me: the transformation into "werewolf" and the daytime or nighttime one? Do you experience it in full sun or on full moon nights? Who is the real Kim Wilde?
The answer can only be provided by her songs, past, present and future. 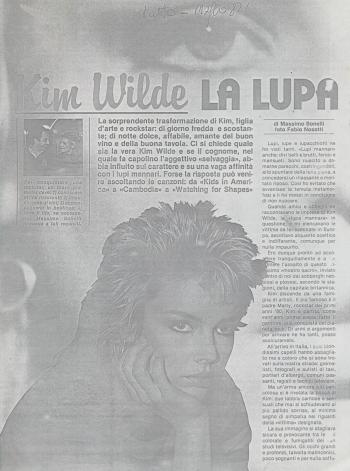 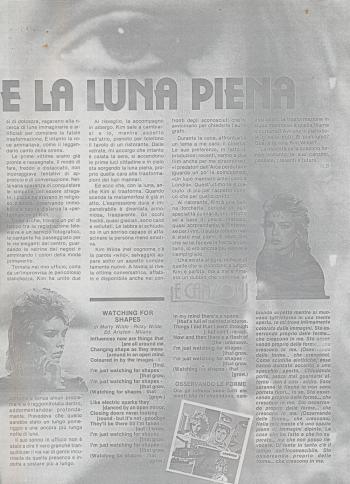