Kim Wilde: up in the clouds, playing live

Kim Wilde looks a million dollars and the way that she is selling records around the world, she could well be earning them too! And yet, incredibly, despite hitting the charts in countries across several continents, it wasn't until recently that she did her first 'live' tour.
"I'd done a lot of travelling abroad", she says, "but that was mostly for promotional visits or European television shows. They do have some really good pop programmes on the Continent, some of which are networked across several countries. We haven't got anything to compare with them here! I mean, they go on for a couple of hours or more! But hopefully, if we get this satellite television soon we'll all be able to tune in to them!"

So what was the prospect of going out on a stage in front of thousands of people like for her?
"I suppose it was a bit terrifying at first. The nearest I'd been to a live audience was in a television studio doing something like 'Top Of The Pops'. That's a rather contrived audience when you compare it to people actually paying money to com eand see you. So, yes, I was shaking a bit at the thought of facing a real audience for the first time!"

But Kim is lucky in that her father, Marty, is a former pop star himself, her mother was a dancer on a pop television show, and her brother, also a pop star at one time helps write and produce her records. "That was fortunate to have so many people close to me who could give me the necessary encouragement and advice", she says. "They knew exactly what to expect and could calm me down and prepare me properly for those first shows.
"And to make sure that I felt at ease when doing my British show, they decided to organise several concerts abroad for me in countries like France and up in Scandinavia! I suppose that when I say I was nervous about doing those gigs it wasn't quite as bad as that. Because the fact that I didn't know what to expect meant that I couldn't be frightened about anything. I was definitely wired up about it though."

Kim and her band went into a couple of weeks of rehearsing to make sure that everything was right.
"Then we hired a theatre for a day to practise in the kind of situation that I'd find myelf in doing the concerts. It was the first time that I'd been on a stage and it seemed enormous compared with the kind of small one I'd used for television performances! I think it was at that moment that I knew there was no turning back!
"There was a lot of advice flying around. It was as if everyone from the sound engineer to my father had something to tell me. But I knew that what it all come down to was 'me'. I just kept my fingers crossed. I knew I had a great band and that they all had faith in me. So because of that I had to have faith in myself."

So, prepared as she ever would be, she flew off to Scandinavia to face her fans and admits that she was surprised just how quickly everything moved from the moment tha tthe curtains opened on her act!
"I can just remember that there I was at the microphone facing out to the audience when suddenly there was this tremendous surge and hundreds of people came rushing to the foot of the stage reaching up towards me. It was the strangest feeling! Everyone was going crazy and the whole thing was a bit chaotic! Luckily, everything went off without a hitch and I came backstage high up in the clouds!
"I just couldn't get down and didn't want to. The feeling was so exciting. That night I was awake for hours thinking about it and wondering what the other concerts would be like. I didn't realize just how much there is to learn about being able to control an audience. So the next night I tried to use the experience I'd learned from the night before and things weren't quite so frantic!"

But she hadn't reckoned on France. For some reason, which she can't understand, but which shouldn't be difficult for any fella to grasp, she is treated like a goddess there. Her single of 'Cambodia' has sold nearly a couple of million which puts her in the superleague bracket! Perhaps she reminds them of the young Bridget Bardot of the 1950s. As France's golden girl, she stepped onto the Paris stage and sent her fans crazy!
"I had to be very careful not to be pulled off the stage", she laughs. "And after the concert I had to be smuggled from the theatre because there were so many people wanting to get autographs or talk to me!"

After that, she wondered what awaited her on her British tour, but she needn't have worried. It was every bit as successful as the foreign dates and Kim is now looking forward to setting up another tour.
"I know that some artists, particularly solo singers, aren't too keen on touring, but I see it as an essential thing in this business. People want to hear you live and I love performing to an audience! I don't think I couldn go for several years before doing another."

What with appearances in Germany, France and Switzerland completed and a contemplated assault on the American market, Kim is going to have her hands full!
"My record of 'Kids in America' did quite well there and so I'm hoping to follow that up with some television work", she says.

She reckons that she has been incredibly lucky to have achieved what she has since she started in 1980. And she attributes a lot of that luck to her favourite boots.
"I've had them years, but I always wear them for recording or stage work. They wore out recently but I've had another pair exactly the same made. Let's hope they're just as lucky!" 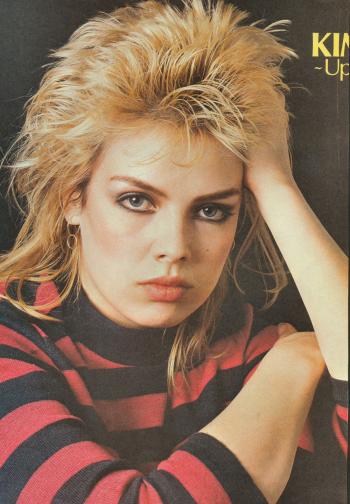 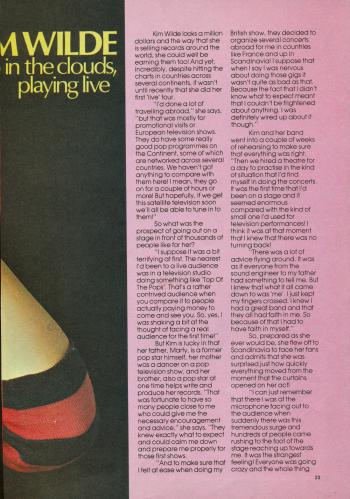 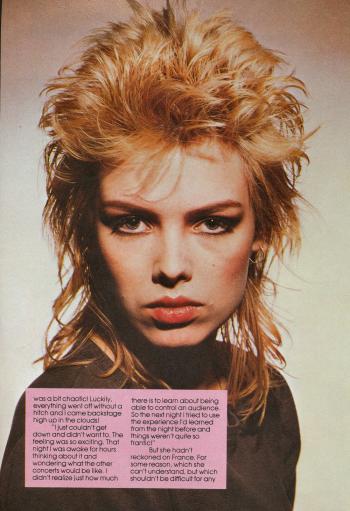