The 21 year old KIM WILDE is winning over the HEARTS of tenthousand young people. Her photographs hang in the bedrooms of numerous boys and the many letters with MARRIAGE PROPOSALS are countless. What is her SECRET? 'My parents have helped me enormously. Without them I'd have been nowhere!'

She is not the GLAMOUR-type. A quiet girl, who dresses in inconspicuous clothes, which she mainly buys in small boutiques and SECOND HAND clothing shops. Just like many young girls she is 'a little IN LOVE' with her father. MARTY WILDE, a famous singer and entertainer. He is VERY PROUD of his daughter, empathizes with KIM, but does everything to keep her on the STRAIGHT AND NARROW path of SUCCESS. 'She is very young and VULNERABLE. Young people like that need a little coaching, then they are FINE.'

The whole Wilde family is musical. Father and brother Rick write all the lyrics for Kim's records and mother Wilde sings backing vocals now and then.

The SEXY Kim is not as wild as her name suggests. The only thing about her that's really 'WILD', are her BLONDE manes. 'Everyone seems to think I spend HOURS at the hairdresser's, to get it the way I want, but I don't even have TIME for that. I DYE and cut my hair myself, in front of the mirror in the bathroom. I do the front myself and the rest is done by my mum', says the formerly dark blonde Kim. She is a quiet girl, not overconfident by her own SUCCESS. Next year she wants to try and conquer AMERICA, but she does not want to force anything. Her CAREER is being built up gradually. 'I used to be EXTREMELY unsure, I felt UNATTRACTIVE and INSIGNIFICANT. All the girls in my neighbourhood had BOYFRIENDS, except me. I wanted to BE SOMEONE ELSE but then my PRINCE CHARMING came along and I fell VERY MUCH IN LOVE. He was so HIGHLY PRIZED, that I suddenly became very popular. The others suddenly saw me as a girl that belonged. That BOY SAVED MY LIFE.'

Now Kim is obviously VERY SATISFIED with herself. She still has all her old friends. 'It is a bit strange for them when someone comes to me to ask an autograph but they HAPPILY don't see anything different about me than before I was FAMOUS. I haven't CHANGED a bit by the way.' Despite her PROVOCATIVE exterior she is very SWEET and OPEN. She doesn't have a BOYFRIEND at the moment. 'I don't have time for that, on top of that I'm not looking for the man of my DREAMS yet. Some girls feel 'NAKED' without a boyfriend, but I don't have that.'

Kim's parents keep her PRIVATE LIFE very SECRET. With every interview there's a member of the family present, or Kim's manager Micky Most. They make sure there are no INDISCREET questions being posed and they prevent Kim from giving away too much. The fact that she is being protected by her parents does not mean she is dependent. She is very OUTSPOKEN  and only does things she wants herself. 'I am FREE to do what I want. I think every woman should be. You don't need a WOMEN'S LIB movement for that. The EXTREME groups tend to EXAGGERATE things, which means they achieve the opposite of what they want. They put themselves above OTHER PEOPLE and I DISLIKE people who feel BETTER than OTHERS.'

Kim thinks family life is very important. She loves her family but her BIGGEST FAVOURITE is the BABY of the family Wilde, ROXANNE. To THANK her parents for EVERYTHING they DO for her, Kim gave a GIGANTIC birthday party when she turned 21 in a FAIRY CASTLE. Her parents were obviously the GUESTS OF HONOUR. Kim invited them for a small, INTIMATE party. When they arrived, over THREEHUNDRED people were there and it became a big PARTY with lots of music until well into the small hours. After 'Kids in America' and 'Cambodia' Kim now has another HIT with 'View from a bridge'. 'She has EUROPE in the palm of her hand, NOW THE REST OF THE WORLD', says a proud Marty Wilde. Yes, she has big plans this BOLD looking woman but she continues to live at home for now. 'Many people look at me in wonder when I say my parents are my BEST FRIENDS. It is not allowed or something.'

'I don't let it get to me. That INDIFFERENCE comes from my MUM. My mum is not an INTELLECTUAL, but she is a woman with knowledge of human nature and UNDERSTANDING. She has always explained how certain things happened and why. She was WONDERFUL. My father was never TEACHING US LESSONS. He spoke a lot about all kinds of thinngs and made me understand other people. I am ETERNALLY GRATEFUL to my parents for the GREAT CHILDHOOD they have give me.' When she is asked whether she has any big wishes left, Kim answers: 'I would like to play in a MOVIE. Just like JOAN CRAWFORD. All those MOVIE STARS from the old days are WONDERFUL.'

'Maybe you can't continue to make music forever. I am very CRITICAL in that respect. I like Ska music but sometimes I am in the car and then I suddenly hear BUCKS FIZZ. I think it's DREADFUL but I still hum along to their music. It has a certain CONTAGIOUS EFFECT I think.'

Who knows what will happen with Kim Wilde. She will certainly CONSIDER every step well, because she certainly isn't STUPID!

[In case you're wondering, the magazine Weekend ALWAYS uses a lot of CAPITALS in their ARTICLES. - Wilde Life ed.] 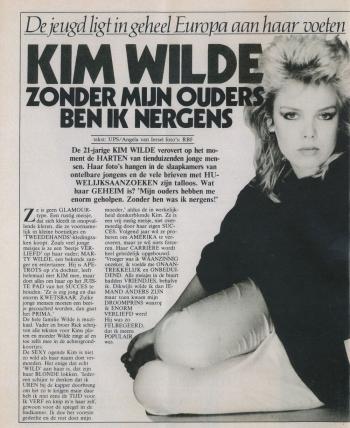 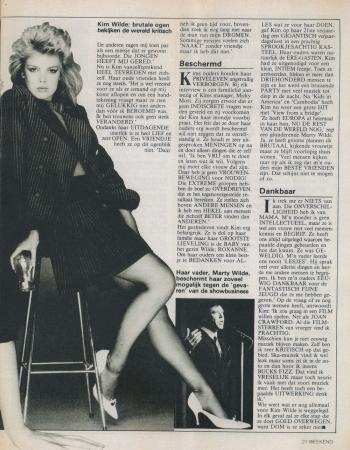