Kim Wilde: 'Without Ricky I'd have been nowhere'

LONDON. Record company RAK Records is housed in a large premise in a quiet street near St. James's Park. The recording studio is in the same house and KIM WILDE is currently working there to record her new album. It's saturday afternoon, but for an artist that doesn't mean it's time to go shopping, especially when there's some recording to be done. And that doesn't seem to go very easily for Kim right now: the RAK lady tells me that there is some delay. But Kim did make some time for the interview.

Jeans, a blouse, the blonde hair in a knot above her head: 'Hitkrant, yes, I see them regularly.' A bit of an unhappy face, but Kim is forthcoming enough. Although I do get the feeling that she isn't really talking freely during the interview.

I hear there are problems with the recording?
Kim: 'Well, problems... It doesn't always go the way you want it to. A whole album demands a lot from all of us, not just me, but also Ricky and my dad, because they are as involved in it as I am.'

A lot has already been said about that of course. Your father is Marty Wilde, used to be a famous singer himself, your brother Ricky writes and produces your records. Do you have the feeling that without them you wouldn't be where you are today?
'I don't know. I have always sung and I have always wanted to be a singer, so it would have happened eventually anyway.'

Yes, but with the help of your father and Ricky you have turned into an instant success.
'That is true and I think that I would have been nowhere without Ricky. 'Kids in America' and 'Chequered love' have been his work for the most part and that is also the fact with 'Cambodia', our new single. Let's put it this way: I would have gotten there without daddy and Ricky, but it would have taken more time!'

But success is here now. What does it mean for you?
'Not that much, really. I can't do much with it and I don't have the feeling I am a star or anything. I mean: I'm not being constantly happy all the time because I am so successful. The most important thing for me is that I can do my music and singing. I can't deny I like it a lot that the audiences like it. But it's just going on with the business now.'

It does bring a lot of side issues you have to tend to as well.
'Tes, but that's no trouble either. You mean fans, and interviews?

Yes. Don't you think that's a bore?
'Not boring, but tiring sometimes. Fans are very important for an artist and I give them all the attention that I can.'

Do you read your fan mail?
'Yes, as often as I can. That takes less time than you'd think, because a lot of letters are short and are about the same things: they wish me success, tell me that they like to hear me sing, and that kind of stuff. I can get through that very fast.'

Other letters as well?
'Oh yes, moving letters sometimes, like the Australian girl who lost her father and wrote to me about that. I wrote back to her, but I can't always find the time for that. My mother does that sometimes.'

It's a family business then, isn't it?
'Yes. We do everything together, daddy, Ricky, mum and my little sister Roxanne. The whole business around me is kept in house as well, the fanclub, bookings and of course the records. I don't understand much of contracts, but it's what my mum knows best, she did it in the old days as well. I trust my family blindly and it seems to work.' Kim smiles, and that is rare, because she looks a bit concerned all through the interview.

You don't seem like the happiest person on earth right now.
Another little smile: 'No, I know. Sorry, it's not my intention to look so sad. But I'm really a serious person.'

Does it have anything to do with the infamous story that your manager doesn't want you to smile?
'It's not like that. We just felt that one gets the idea of the 'dumb blonde bimbo' when I always appear with a big grin on pictures. I want to avoid that.'

You are blonde, but not dumb?
'Well, I don't think so. It's hard enough to focus the attention to the singer and not the girl.'

That's what you get for looking good!
'I can't help it. I used to be an ugly kid and I had a hard time with that. And now I have a hard time with not being so ugly anymore!' Thankfully, another smile appears.

Work calls and Kim has to get back to the studio. We say goodbye in the hall and she says: 'You mustn't think too much of it, those things about looks. It's about the music after all.' And she disappears behind the heavy studio door, twenty years, blonde and maybe a little too serious. 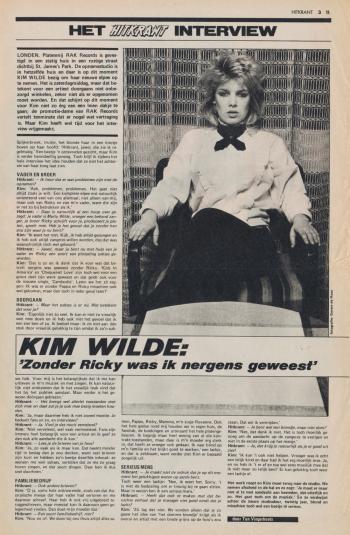