Kim's alone in the wild world of pop

Kim Wilde followed her father, mother and brother into the pop world and admits she had a lot of help from them - but on stage, she's on her own.

No amount of family background and know how will save her if she can't entertain an audience which has paid to be entertained. After several hit records, 22-year-old Kim made her first British tour earlier this year - and Thames Television was there to film the performances and the backstage joys and hassles. The result was Kim Wilde - First Time Out.

Kim has just arrived back from a long-awaited tropical holiday in time to see the show. "I really needed that holiday", she told me. "It has been such a hectic year, and I had flu just before I left. The tour really took something out of me."

Kim was born in London, the second child of vintage Rock 'n' Roller Marty Wilde and his wife Joyce, who had been one of the Vernons Girls. They already had a son, Ricky. The Wildes - still known to friends and neighbours as the Smiths, their real name - have always been close a family, and both Ricky and Kim still live with their parents.They have been joined in recent years by two much younger children, on whom Kim dotes.

Marty's heyday as a pop star is long past, but he remained in 'the business' as a songwriter and record producer and then in the late sixties, he tried to promote little Ricky as a sort of British Donny Osmond. Ricky had a lot of publicity, but few record sales.

As the writer of Kim's songs, he is much more successful. "I did backing vocals on Ricky's records", Kim told me, "and when he had some songs that he had written for a girl singer, I was the obvious person to sing on the demonstration records. It was Mickey Most, the record company boss, who suggested I should record them commercially". The first of them, "Kids in America", was a worldwide hit, to be followed by several more. For publicity photographs, Kim bleached her hair - and was accused of trying to copy the image of Debbie Harry, lead singer of Blondie.

"There was no deliberate image", she says categorically. "I've never tried to be other than myself".

In 1981, she and Toyah Willcox were undoubtedly Britain's top female pop stars, but Kim's fortunes have waned a little this year. Her last single, Child Come Away, wasn't rapturously received. "I would like a hit record", she admits, "But dad and Ricky are busy writing some new songs at the moment, and I'm sure I'll find one among them." 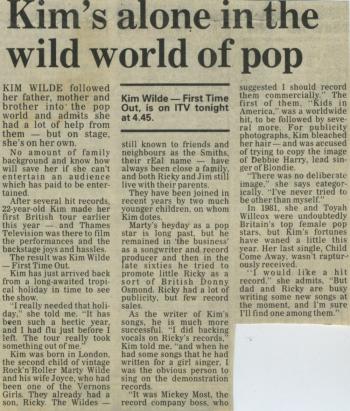