Kim Wilde, daughter of Fifties' idol Marty, is currently one of the music industry's hottest properties.

From Kids in America just two years ago she has grown into a pop phenomenon, Britain's answer to blonde bombshell Debbie Harry. Tonight, a time when television normally unwraps entertainment stalwarts to man the Hogmany ramparts, Ms. Wilde gets her own documentary.

'First time out', which goes out on YTV at 4.45 p.m. today, is a close-up of the preparations and launch of Kim's first British tour this autumn. It marked her baptism as a live performer - she did eight dates in Denmark prior to the UK tour - and people warned her against allowing the cameras to film it. 'They said I'd have enough to do just getting ready. But it was my first British tour. I wanted it documented.'

The young woman sitting in a small office at Rak Records in North West London didn't look anything like a sex symbol and was treating a bad bout of flu by alternating sips of tea with sticks of bright pink chewing gum. The spiky blonde hair was pulled back from her face with a length of black lace, her feet were encased in beige school socks and black trainers. She wore black baggy trousers, an old vest and two jumpers.

'It's been a long, long year', she explained, dosing herself with another piece of chewing gum. 'The last three months have been really incredible.' She brings out her diary to illustrate the point. Concert dates, television appearances in this country and abroad, recording the video for a single. Kim might well have been studying for an art degree now, had the college she chose not turned her down for a place. 'It was Kingston Poly, I think. When I first went to look round I remember they were playing some really great music in the refectory.'

As it was, Kim got involved in the career of brother Ricky, hung around the recording studios, did backing vocals and tried to make a break into the music business. 'Ricky had written this single 'Kids in America', and he asked me if I wanted to sing it. I was really taken aback'.

A demonstration tape was prepared and played to the man who is Rak Records, legendary pop manager Micky Most. He liked the song and Kim and her career were launched with a chart success. 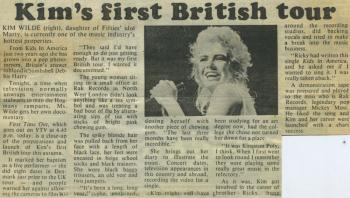