5.30 pm: Kim Wilde - just back from her soundcheck at the 'Falconer' - responds to the audience in the luxury suite of the hotel 'Admiral' in Copenhagen. In front of the hotel there are fans with requests for autographs; in the hall there is tour hectic. One table is taken by the Wilde clan: mother Joyce, father Marty, brother Ricky and tour promotor Mel Bush read the first reviews from the English press and discuss about them.

Since 6am Kim is busy; she has already done three concerts in remote Danish villages. Yesterday she played in a town called 'Holstebro'. The six concerts in Denmark are a ploy from the promotors, who want to give her some experience before the English tour which will take place between 5 and 27 October.

A dose of "Country Gel", with which she plays during the interviews, is a very important prop: she puts it into her hair and keeps it standing up all night.

At 7.30 pm Kim enters the tour bus in full make up: black jeans, high heeled black boots, a self painted T-shirt - that is her whole stage outfit. Mother Joyce is nervously beside her and holds her hand.

Ricky tells jokes (he plays keyboards and guitar and loves life on the road), father Marty gives a helping hand to the band.

The 'Falconer' Concert Hall holds some 1800 fans and is almost completely sold out. At 8pm exactly Kim starts her show with a technical glitch: a short circuit. The stage and hall are dark for two minutes.

And then Kim goes into it with 'Chequered love'. The stage background, a black wall with white markings, looks like the bridge of 'View from a bridge'- Kim's idea.

There's more: she took care of the tour programme, the stickers and t-shirts, the band and the lights and sound. The rehearsals with the new band took only two weeks.

The show runs about 90 minutes. Without a pause. Sometimes she takes up the water bottle or wipes the sweat from her face with a towel. The show is fast and snappy. There's only one incident during the encore: after the roaring 'Kids in America' she has to play 'Chequered love' one more time - there are no other songs left to play (the newest single 'Child come away' was released on October 4 and has to be rehearsed first).

Kim is overjoyed. The tour test has succeeded. Her tour of Germany will follow soon. Bravo will publish the dates as soon as they are announced. 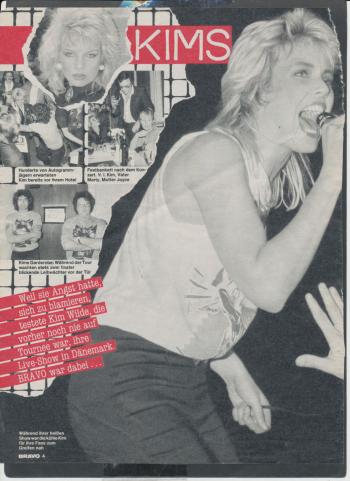 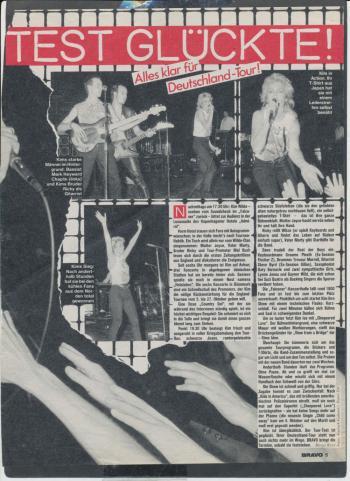