That spikey-haired sprite of pop, Kim Wilde, is looking distinctly baggy-eyed these days. "I've never felt so shattered in all my life", she says, in the aftermath of her first marathon tour of Britain and Europe. "I didn't bargain for what it could take out of me."

The strain of her first major tour shows all too clearly in an ITV documentary which will be shown on New Year's Eve.

"The camera were on me at moments of nerve-jangling stress", she says. "On occasions I used some pretty choice language." But Kim, 21, won't be around to see herself on TV. "I'll be in the sun on some island a long, long, way away." 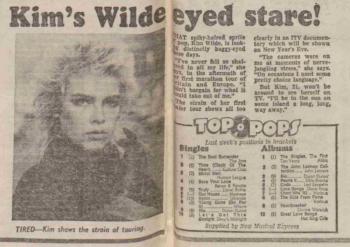