Kim Wilde plays her first live dates ever... with a massive tour next month.
It is the first time the blonde singer has ever appeared on stage.
"Although she's done TV shows before, the only time she has sung live was with her dad Marty when she was 14", said a spokesman.
Her tour kicks off at the Bristol Colston Hall on October 5. She goes on to play: Wolverhampton Civic Hall 6, Scarborough Futurist Theatre 7, Newcastle City Hall 9, Glasgow Apollo 10, Aberdeen Capitol 11, Dundee Caird Hall 12, Edinburgh Usher Hall 13, Stockport Theatre 15, Sheffield City Hall 16, Manchester Apollo 17, Birmingham Odeon 18, Leicester De Montfort Hall 20, Gloucester Leisure Centre 21, Paignton Festival Theatre 23, Bournemouth Winter Gardens 24, Brighton Dome 25 and London Dominion Theatre 26 and 27.

Last weekend Kim Wilde was in the studio recording a new single to follow up her 'View From A Bridge' hit.
But there will be no album from the singer until the new year. Her tour also takes her across Europe, and she will have no time to record until 1983. 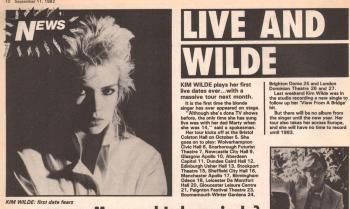