You could be forgiven for thinking that because Kim Wilde is the daughter of Marty, she automatically had to go into the pop record business, but if anything, the opposite is true. He wanted Kim to concentrate on her education. Recently, on her birthday... Kim took time out to talk to MUSIC about her early days and where she goes from here...

Oh the life of a pop star! Crazy parties every weekend. Lots of trendy, well connected people droping in for drinks. Important record producers on first name terms. The glitter, the excitement, just like you read in the Sunday papers. But it wasn't, at least not in the Wilde household. It was only when Kim saw her dad on TV that she realised he was famous.

As she got older Kim and the rest of the family used to go to Marty's gigs and go on tour with him abroad, but apart from a discreet display of silver discs, and a few miles of recording tape, nothing of her home life suggested, so-called, pop glamour. Probably, as a result of a 'normal' home life in the early days, when she now wants to relax, it's not the bright lights of the poseur palaces for Kim. You'll find her curled up in front of the fire with a glass of wine to hand and either Frank Sinatra or Julie London on the record player.

Kim decided very early on that she wanted to be a singer, but Marty, knowing how unstable the music business is, encouraged her to concentrate on her education because she was doing quite well. It was when Kim and her mum were doing backing vocals for Marty on one of his night club tours that he realised she was serious about singing full time.

Kim went onto art college after school, no so much to study art but to make contact with musicians because, as we know, art colleges are the 'breeding ground' of the new groups. As she says, it didn't quite work out as she planned.

"I was amazed, they were all into art! The nearest I got to singing at college was in a review. Two other girls and I did backing vocals to 'Leader of the pack', whilst another girl took the lead. I was really pissed off! I wanted to do the lead, but the other girl had a stronger voice."

However, within weeks of leaving college she had a number two hit with 'Kids in America' and a tour was set up for Europe. France and Denmark fell to her feet and she became a huge star on the continent. An appearance at a major festival in the South of France was filmed for the United States which got her well known in the States and since then there has been a tremendous amount of interest in Kim from there.

"The interest from the States has been phenominal", Kim admitted. "We've kept them waiting because we felt the time wasn't right, we wanted to get the material right. But just recently people in America have got interested in promoting me so we'll see what happens. I may go and do some gigs."

With a new album and single out, the interest in Kim is bound to increase. She spent about eight months on and off in the studio working on the new records and although she didn't write any of the songs herself she was very much involved with them as she explained.

"I didn't actually sit down and get the keyboards going or anything, although I do intend to in the near future. What I will say is that my music wouldn't sound anything like the way it does if I wasn't involved with it. I get involved with the ideas my dad writes. I don't sing all the lyrics he writes, some of them I find I don't relate to, but that happens very occasionally. I'm very lucky, we have an incredible lot in common. It's amazing, his mind is almost like my mind is now. It's so obvious when you read his lyrics. They relate to my life so closely at so many different times. I think it's uncanny. He'll come up with an idea and I might say I like the idea but I'm not keen on this bit or can you take it from this angle and so on. He's always willing to listen, always ready to try any idea I may have, that's how we do it."

As all who've seen her will confirm, Kim Wilde's visual impact is amazing, and whilst she is always prepared to listen to suggestions about what she should or shouldn't wear, the final diecision is very much down to her.

"Clothes are down to me", Kim said. "People have made suggestions but I tend to follow my own instinct which tells me that clothes aren't as important as some people would have you believe. I find the whole issue of people looking at the way others dress, and then judging them on that, very offensive."

In a very short time Kim has achieved a lot. She's got hits behind her, is ahuge star on the continent, has a new album and single out, and America is calling. Is she then sitting back relaxed and confident about the future?

Looking back over her very short career, Kim is the first to admit that she was lucky.

"Straight from art college into 'Kids in America', Kim admitted, "It was great for me because there was no time wasted. It wasn't like a year of my life lost searching for something and not getting it. I didn't want to have to prove myself to anyone, and I was so lucky when 'Kids' became a hit. I just made the record and people bought it. I didn't have to crawl to anybody to make it a hit. I think it knocks a lot out of people at the beginning of their career having to crawl to people, being places they don't want to be and when they get there, they're not like they were. They may feel a bit guilty about what they've had to do and it takes the shine off them. I was really lucky I didn't have to do any of that because it would have done me in. Some people can do it, they don't mind. To me it would have don me in totally if I'd had to go through all that. I was very very lucky. I guess lucky's the word isn't it?" 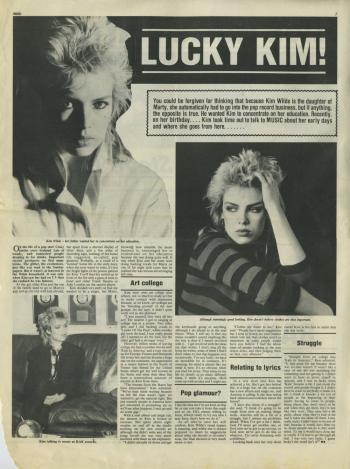