Superstar singer Kim wilde, 21, is well on the way to becoming a millionaire.

And Dad Marty, the former rock 'n roll heart-throb, is writing hit songs again. But there's more to this amazing family of pop.

Kim's brother, Ricky, 20, is fast making his name as a composer and record producer. As her mother Joyce acts as the family's business agent while bringing up two new Wildes - Roxanne, 2, and Marty jun., who is just one year old. Kim's rise to pop fame has been phenomenal - but she remains down-to-earth. Marty says of his daughter: 'She couldn't care less about material possessions. She behaves the same way now as she did when she had nothing.'

Being the famous daughter of a famous father isn't a problem to Kim. In fact, Marty's advice has been invaluable on Kim's road to stardom. 'Dad has backed me all the way, although at one stage he was a bit worried about me going into showbiz. He was young and reckless when he came into the pop world, but now he's really sensible. The main advice he gave me about this business was: 'Enjoy it and work hard, then you'll be OK.' And he was right!'

Kim admits there have been times when she wished for an 'ordinary' family, like those of her schoolfriends. 'I was sometimes embarrassed by my famous father', she says. 'Often, I wished Dad had a normal job and Mum was home baking pies. I was the victim of a lot of envy at school. But that experience toughened me up.  Both my parents were very good. They explained why people were like that and that you had to forgive them. I love my parents very much. They've done a lot for me and I want to repay them for their kindness.'

Her parents' fame did not prevent Kim having a normal childhood. 'I had more than enough love', she says. 'My Dad was away from home far less than a lot of people who weren't in showbusiness. There's supposed to be some sort of taboo about the children of famous parents making it, but I don't regard their success as any kind of burden. I have perceptive and intelligent parents. They were always explaining things to me and Ricky my brother. Ricky almost became a child star once and I was jealous. It didn't spoil our relationship, but it hurt a bit at the time. Even at that age, I wanted to be a star. Despite that I would love to get married and have lots of kids - some day. I have several boy friends, but I think they know about each other. I don't think I'd like a steady relationship at the moment. I would get too involed - and I don't think I could handle that.'

Kim does not like expensive clothes, and hates flashy cars. Marty told her recently it was time she got herself a luxury car - even a Rolls. She said she wasn't interested. 'Any old car will do - I don't care as long as it goes.'

Marty said 'That's typical of her. If fame and fortune were taken away she would just shrug her shoulders.'

However, Kim is careful with money and her father is confident she will become a millionaire. Marty realised his daughter was bound for stardom after seeing a video recording of Kim singing a demonstration number. 'I'd lived with Kim for 19 years, but it was like seeing her for the first time', he said. Men upset kim Wilde at their peril. At a party recently one man kept being rude to her - so she got up and give him a black eye!

Says Marty: 'This guy kept putting Kim down and wouldn't accept her as just another girl. She hates that. Kim took it for quite a while, then thumped him. '

Kim has only ever had two steady boyfriends and neither was in showbusiness. There was talk of a romance with pop star Steve Strange, but her mother put it down as a publicity stunt. 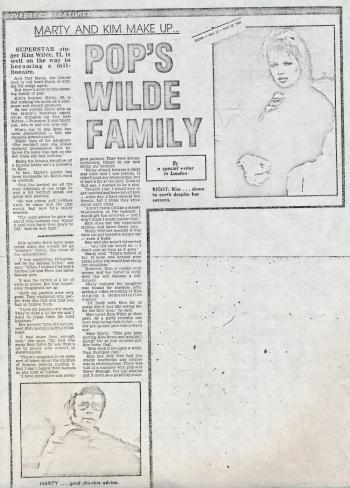