Watch out for Thames Television's film all about superstar Kim Wilde on Friday 31st December at 4.45pm. We sent young Tabitha Potts along to talk to her...

When I was driving to the studios to interview Kim Wilde I had no idea what she would be like. I knew her records but I hadn't seen her, so I expected her to be very glamorous with a punky hairdo. Instead she was quite ordinary, dressed in black trousers, a black T-shirt and her hair was a bit untidy. Which wasn't surprising as she told us she had been doing interview since twelve o'clock that day, and I went at five.

I asked her how she felt after her first tour. She sad it had been wonderful. But she had travelled with a band of seven, and although it was a great success she didn't expect to pay for the costs, but "I loved to see all these people who have been buying my records and sending me letters and things. It's wonderful to be loved by a lot of strangers."

Kim is twenty-one now, and been a singer "since I was about your age. From when I was very young, it was always music. I was in a choir first of all, then I joined a music club. I was into anything musical, and of course so was my family." If she hadn't become a singer, what would she like to have been? "A journalist perhaps. I always liked English, but when I tried it I didn't have the economy of words."

Kim said she didn't care much about clothes, she's worn the same black trousers all through her tour, but she enjoyed shopping in Oxfam and Help the Aged shops, where she could find everything in one place, clothes, records, books etc. She enjoyed watching TV and reading, and has always wanted to keep an aquarium "but I don't have much spare time. I'm nearly always working."

How did she make it to the top so quickly?
"Well, my brother and my Dad both wrote songs, and then my brother got a deal with R.A.K. and I used to come into the studio doing backing vocals, then one day they thought I could try one on my own."

When I asked if she preferred touring to studio work, she said: "yes, in many ways I do, but there are some things I can do in a studio which I can't do on stage. I like harmonising with myself, and I can't do that touring."

Had she had any embarrassing moments?
"Yes, when touring you move from place to place so fast it's hard to remember where you are. So we arrived in Birmingham and for some reason I thought we were in Manchester. So when I went on stage I was saying 'Hello Manchester', and thought 'that's funny, I don't seem to be getting any response.' When I went backstage someone said, 'It's Birmingham, you chump', so I had to rush out and apologise. They say it happens to evone touring at least once.'

What advice would she offer for anyone who was starting off in a singing career. It was hard to say. "I was very lucky. I had a father and brother both writing songs, wonderful songs, so I was brought up in music. I think anyone has to be totally dedicated, to really love music and work at it and be enthusiastic, that's the most important thing."

Kim Wilde is a lovely, friendly person and I'm going to join her fan club, but I felt a bit sorry for her when she answered my last question - I said "What would you buy if you had £20,000?" and she answered "£20,000's worth of time." Being a star does have its drawbacks, it seems! 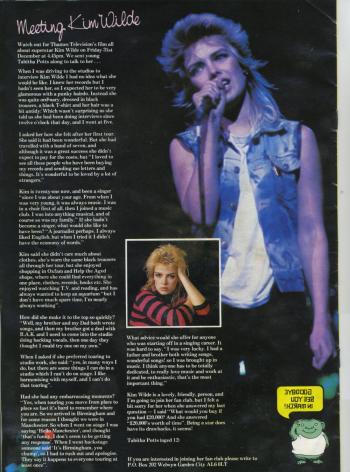