Kim Wilde is a funny girl. She won't mind me telling you that, I'm sure, because unlike most people in her position, she doesn't much care what we think of her.
I meet the surprisingly strongminded young person at the offices of RAK Records, where we are served fresh orange juice by RAK boss Mickie Most. Now there's something that doesn't happen every day!
We settle down and switch on our tape recorders - yes, both of us. Kim Wilde explains that hers isn't there for reasons of Nixon-style paranoia, but because she simply likes to tape some of the interviews, and play them back for her own amusement months later. Fair enough. So...

What was it like playing your first ever live dates (these took place some two weeks ago in Denmark)?
"A bit like being in a dream, where you're experiencing something but you're also the third person, watching the whole thing. Very unreal. At the first one, we were playing to a couple of thousand people, and they all went crazy - it was amazing. Maybe too much --"

Next step is her UK tour. Is playing live an area in which she can desert her own authority, I wonder, as opposed to the studio where the songwriting-producing team of her father and brother are in charge?
"Well, as far as I'm concerned I'm very involved in the making of the record, but then the public wouldn't see that, I suppose. Yeah, it's true - when you're out there on stage, it's all down to you. Nothing, even your chart success, can hold you up. It's just you and your band, and you swim or go under."

Who do you think you'll be playing to?
"Well, in Denmark there was always the cute little blond haired kid on someone's shoulders, right down the front, and the 40-year old bloke with glasses. Lots of teenagers. I've got a feeling that there'll be a lot of very young ones."

It's funny how, with the climate favouring out and out pop, you've gained a sort of credibility that before you probably wouldn't have enjoyed. You'd have been classed as a lightweight, I suggest.
"Oh, that's just the press, saying what it's chic to like. Who cares, really? People were buying Dollar records before it was hip to like Thereze Bazar! I'm not being cynical about it - it was nice to be on the cover of The Face, but start taking all that too seriously and it's the kiss of death isn't it?"

She clears her throat in a slightly nervous sounding way. This appears to be habit, mind you, rather than something brought on bv the ordeal of being interviewed by vour correspondent. Otherwise, she's very composed. What is it that keeps her so level-headed?
"Partly my temperament, I suppose - I'm quite placid, except when something bites my interest, then I tear off and dive in at the deep end of things. I have good parents, too, who act as a stabilising influence; not just now, with my fame and everything, but before. All the other stuff I went through, having a famous dad and all that."

Have you ever had a "proper job"?
"Yeah. I was a cleaner for a while; then I worked in a greenhouse. I nannied for a couple of kids down the road. But they were all summer jobs; a few months after I left art college 'Kids In America' happened and that was that."

The latter single recently slipped in to the US Top 20. Does this mean an imminent Kim Wilde launch in America?
"I'm not that enthusiastic about America at the moment. I'm enthusiastic about my tour - I can only take one thing at a time."

You might be as successful as Joan Jett or the Go-Gos over there. Does that prospect daunt you?
"Well, I don't fancy being scuttled off to America for months - or anywhere else. I like being in England too much. But I'm not scared of success, no matter how big it is. The more the better! I hardly ever freak out about anything. but if I did I think it would be about personal things. not anything to do with the business."

Do you handle relationships as coolly and ca1mly as you do your career?
"Umm... I think so. I mean, there's nothing bizarre in my private life. I think I've actually grown more level-headed over the last year; more confident. generally a bit more grown-up."

You've said in the past that you'd like to learn to write your own songs. Made any progress?
"No! the tour came along after the second album. But I've just bought a place of my own. and I've got a piano in it. and I'm not going to fill it up with settees and televisions. I'm golng to fill it with things that are conducive to creating. Get my Teac down there..."

You're going to live on your own?
"I've never found anyone I'd like to live with, even friends, much as I love them."

Are you a sociable sort of person?
"Yeah, but I like the idea of living alone. Still, ask me after six months. I'll probably be crawling out the front door going: 'Somebody talk to me!' I've always lived with my family, I'm used to pandemonium. It'll be very quiet on my own, and I've yet to find out how that will feel. I think it'll be good for me."

You do have to do housework, you know.
"I've done housework all my life! I'm really a very good cleaner." She pauses ta reflect for a moment. "I don't spend much time at home, anyway. Most of the time I'm in a car or a train or a plane going somewhere. I love being busy. When I'm not I freak - I start eating."

What do you eat for comfort?
"I love sweets. And having a younger brother and sister at home, there's always Milky Bars lying around the kitchen...

As our conversation progresses (we move on to talk about the sultry Wilde-as-sex-symbol/object. and her views are sharp and well-expressed), one Question demands to be asked. Namely, how come people don't realise that you're quite clever?
"Oh, I don't believe in forcing any part of myself on anyone. If they find out that I'm not as brainless as they thought I was that's marvellous. but I don't feel at all obliged to prove it. I'm like the kid at the back of the class who never puts his hand up. He knows the answers to the questions, so why bother to put his hand up. Not that I do know all the answers, but I do my best. I'm learning ali the time."

To go back, however, to the sex object tack (pun!), it seems that the pouty look so often seen in Wilde pictures is not an attempt to look sexy, but quite the opposite. She hates "show-a-Ieg sex", "Smile! sex" and thus declines, as a rule, to smirk prettily for the camera.
"It's pretty boring gazing into a lens, you know," she claims. So it's the deliberate projection of sexuality that she dislikes?
"Mmm. If it's there, it'll come through; it doesn't need to be overstated. But when it's forced, or when it's angled, it becomes faintly ridiculous."
From my armchair in front of Top Of The Pops I've never viewed her as much more than a girl with the right look for the moment. But here's a funny thing - there is nothing ridiculous about Kim Wilde. A rare distinction. 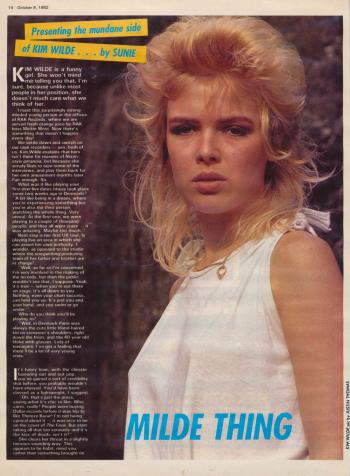 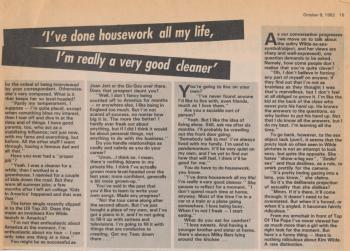 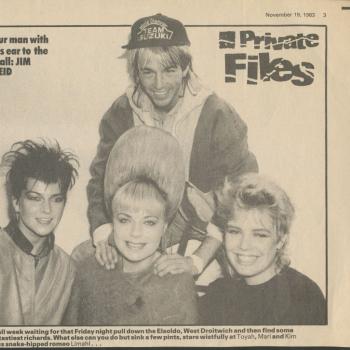