Copenhagen wasn't, perhaps, at its best. They banned live sex shows in 1976, the Tivoli Gardens looked like being closed for the upcoming winter, 50 British soccer fans were arrested after street brawls following the England v Denmark game, and some unions were threatening strikes for higher wages. And it kept raining.

Over at the Plaza Hotel, there appeared to be some sort of action. A handful of young girls and boys had been hanging around peering through the windows for much of the day, watching a steady flow of Scandinavians and British journalists go inside. In the bar, rowdy roadie-type voices were loud in argument. "Goddorf, I'm not gonna pay two quid for this muck!" You can always tell English roadies anywhere in the world - they're the loudest, the most boastful and obnoxiously nationalists. They've got nothing on the loudmouthed ockers at Earls Court.

Upstairs, on the sixth floor, Kim Wilde held court. She'd just finished two of her first ever live shows and while she was obviously quite excited, you couldn't tell. She lay back on a comfy sofa in her usual black slacks and T-shirt, surveying the grey skies through the windows of the luxurious hotel suite.

Wilde almost looks like a processed pop machine. Her skin is perfect, her hairstyle casually chic, and her manner normal but firm. Even now, after all those hits and interviews, there's a tinge of nervousness which is pleasing to see. She's utterly down to earth and pleasant, just as she was when I first met her when she was an obscure hopeful hoping that her first single called "Kids In America" might do something for her.

"They still ask me about father", she sighs. "Either that, or they ask why the little girl of a well known daddy isn't an obnoxious bitch."

So why aren't you, Kim?
"Because if you knew my father, you'd know he'd stand for no such nonsense in our house. Besides, people get their dates all mixed up anyway. I can't remember dad when he was at the top of the charts. He was on his way down, he was no longer the big star, so it wasn't as if we were living in a famous person fishbowl. Kids of famous parents turn out bad only because their parents don't have enough time for them, or if other people flatter them to get to their parents. It didn't happen to us. We lived in a normal house, where my father happened to be a musician who went off and did gigs. We weren't being bombarded by the music industry."

Although she's lived with her family right through the first two pop LPs and all the hits (brother Ricky was in the room next door, ma and pa down the corridor) Ms Wilde is to fly the coop. She's about to move into a flat of her own - alone.

"As much as I love my friends, I haven't come across anyone I'd share a flat with. I like being by myself, and I need to be alone because when I move in, it's going to have the usual settees and TV sets. There'll be a huge piano, tape recorders, I want to get stuck into my songwriting. I need the peace."

The house get too noisy for you, huh?

"It's like any family with small kids, you know. I just want to live by myself to see how I go. It'll be good for me. Who knows, in six months I'll be running down the street yelling 'somebody please talk to me'. But in the last two years I haven't spent all that much time alone anyway - I'm just travelling in a place or car somewhere or in the record company office doing interviews.

The two Denmark shows were a warm up to a full scale British tour which should be in full onslaught by the time you read this. Aside from any performer getting onstage for the first time, (well, solo for Kim; she used to appear occasionally with dad in his workingman club days) the eyes will be sharply on her to see if she can deliver the goods without Dad and little brother around.

"Yeah, it really is strange, that people still see me as this stupid dummy that sits there and lets her father and brother do everything for her. Ricky and Dad write the songs but I work just as hard in the studios as they do. But obviously the public and the critics never see that, so it doesn't worry me. But yeah, you really are there on your own - just you and your band. And it's up to you. Not even the fact that you have had all those hits will save you if you put on a bad show - which we didn't. I'm still in a bit of a dream about it, really, because we'd been building up to this point for so long that half of me was experiencing it, and the other half was up in the balcony somewhere watching me go through it. But it was great, all those thousands of voices cheering you on. And such a cross section of people. There were the young kids down the front dancing, and on the side and right down the back there were a lot of older people too. I don't know what it'll be like in Britain. Probably a lot of young kids."

"Kids in America" is currently climbing up the American charts - were there plans to get over there?

"Well, funny that, but I'm not all that enthusiastic about America. It's something distant to me. I've got my eyes focussed on this tour and all my energies are concentrated on that. But after that, we'll see. But I want to do it on my tearms or not at all. I don't fancy having to go there for three or four months at a time just to break through. I'd get too homesick!"

How did she view this business - was she aware that she'd be competing with the likes of the Go Go's and Joan Jett for the attentions of the American teenager?

"I don't see them as competition... oh isn't that conceited! (she bursts into a self-effacing smile). Oh, I mean, we are competing in a certain way, but it doesn't really worry me. I'm not a pushy person anyway. And I wouldn't freak out over my record not getting into the charts, I'd rather blow my top over something in my personal life."

So if she was basically quiet, then being in the public eye must be something of a drag for her?

"Well, that's the thing. I live that too! It's another part of my personality, and I do love it. Getting on TV and dancing around, it's great. I don't know how long I'll be doing this, hopefully as long as I want to, but who knows? It could all be over in six months. So why sit there brooding and worrying? You do the best you can."

How had she changed since the records?

"A lot more grown up and confident, although I think I was a bit more grown up than most other kids of my age. I don't think I've changed all that much - I mean, I still have the friends I had before 'Kids'. Most of the time I think I handle it pretty well but sometimes it can really hurt. There is a lot of jealousy and snobbery which really irritates me. I mean, I know someone can be driving in their car and they turn on the radio and hear one of my records come on, and if their genuine spontaneous reaction is 'that's great' or 'what a load of shit', then fine. That's all I ask. It's annoying when people who thought I had no talent now think I'm great because the pop press in Britain has changed and they now don't think I'm a puppet at all, but quite capable of making good records. But the funny thing is that I'm quite open to preconceived attitudes about people too, which is silly. I remember how all my friends were into Joy Division and I thought 'gee, they're only getting attention because that guy died, and it's so sick' and it stopped me from checking out their records for six months although once I did, I quite enjoyed it.

"But recently there was a letter in one of the English papers where this... person... wrote in and said 'why is Kim Wilde riding on the coat-tails of her father.' She made out that Marty Wilde wasn't his real name, it was Kim Smith, and that I should have called myself by my real name, Kim Smith. So stupid! I'm not ashamed of my father, and he did tell me that I'd have crap flung at me because of the name, and I sure did. But that's okay, I can live with it. Why should I deny my father? If I had changed it to Kim Smith no doubt that person would have written in saying 'oh, who does this high and mighty bitch think she is, being ashamed of her own father' so it doesn't worry me. One of the important things my father taught me - and it's really helped me keep level headed over these few years - is that people get very jealous of successful people, and they always try and bring them down. So you just try and not waste your energies brooding or trying to attack them back, you just keep on doing what you do."

Was she disappointed that her recent discs hadn't done as well as, say, 'Kids'. While the latter reached No 2 in Britain, 'View From A Bridge' only reached No 16. Was she obsessed with chart placings, did she see it as the symbol of success?

"Only in the sense that it... you see, since 'Kids' I've been trying to come to terms with my ego, my motivation for all this. I enjoy it, I know, but when journalists asked me how ambitious I was, I really couldn't tell. I remember when Ricky first started out as a singer and there was all this attention focussed on him by journalists, I remember being quite envious and wanting to be in that position myself. But until the last six months I haven't worked out why I did do it. And then when 'Kids' and 'Chequered Love' did so well, I mean they were big hits around the world, I think I was spoilt for success. But when 'View From A Bridge' didn't go up all that much, it hit me that I do want to have big hits and that I do have a lot of ambitions for my music. But thankfully it's not just a blind and empty desire for fame itself - I do want to make good records and put on good shows. 'Pop substance' one of the local papers described it, hahaha. I have a very high standard for myself. When I record the first song of my own I want it to be one of those magical songs that people will remember years from now."

Did she feel she was selling 'sex' as her package?

"I know I've got some sort of sensuality but I don't need to push it down peoples throats. As it is, I feel such a berk staring at camera lens because I get so self conscious, so there's nothing sexy about that. I really don't think I have to prove anything. I know I'm not a dumb, ugly person - I used to feel that way ages ago, but I don't any more, so if people think that, that's fine. If they meet me and realise they were wrong, that's also fine. I know different, so that's all that matters to me." 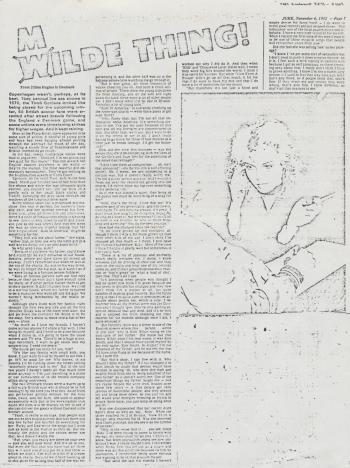