EMI-America Records is using Ma Bell in a unique promotion to introduce British singer Kim Wilde to U.S. rock fans. The campaign was kicked off last month in Southern California, where, in a series of newspaper advertisements, the blonde recording star was pictured inviting folks to call her at (213) 461-3180. Upon dialing the number, the caller's phone is automatically patched into a line that plays tracks from her debut American album, "Kids in America".

According to a spokesman for EMI, the company may install a toll-free number and go national with the campaign if the Los Angeles test proves successful. 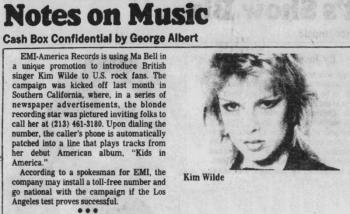