Kim Wilde had plenty of adventure in 1981. This year she's keeping a lower profile and jetting outside the country to promote the songs that are already familiar to UK music fans. Kim Wilde still prefers Oxfam to new romantic ruffles and exclusive designer togs. She had a big blow out of a party for her twenty first birthday. But aside from that, she hasn't really spent much money on herself. Her idea of a fun night out is to camp out in the family's back garden with a tent, a frying pan and a batch of sausages!
Accountants, and other advisers have been trying to persuade Kim to buy a car or at least some fancy new clothing. But she doesn't seem terribly interested. She divides her time between her boyfriends (who are not in the music business), young infant sister Roxanne and Marty Junior and of course work. Her latest single 'View from a bridge' is another Wilde family effort. We understand that Ricky Wilde has changed the spelling of his name to Ricki. But that aside, it's musical business as usual. And Kim wouldn't have it any other way.

'Sometimes when I was younger' she admitted, 'I wished I had ordinary parents. Sometimes kids were envious of me, not for anything I'd done but because of my parents. But I toughened up because of that experience. My parents were very helpful. They helped me to understand why some people get envious like that. Understanding is the key to a good relationship between parents and kids. I hope I foster the same thing when I get married and have lots of kids. But that won't be for a while' Kim promised, 'because I don't have time for a steady relationship right now. I want my career. When I was younger, my brother Ricki was being groomed to be a pop star and I was very jealous. Now, that I'm the one who's been lucky enough to make it, I'm going to give my singing everything I can. Having a family will come later.'
Kim Wilde's secret (not so secret) crush is on Elvis Costello because he's such a fantastic songwriter. Kim is certain that Elvis has been a big influence on her. The rest of us may love him too but we'll probably never get to meet him. One of the advantages of being famous is that you do get more of a chance to meet your idols. But Kim Wilde doesn't want to meet Elvis Costello.

'I'm such a fan that I'm afraid to meet him' confided Kim. 'I'm sure I'd say all the wrong things and he'd think I was daft or something.'
Which just shows that even when you come from a show biz family like Kim Wilde, there's still no cure for being a pop fanatic! 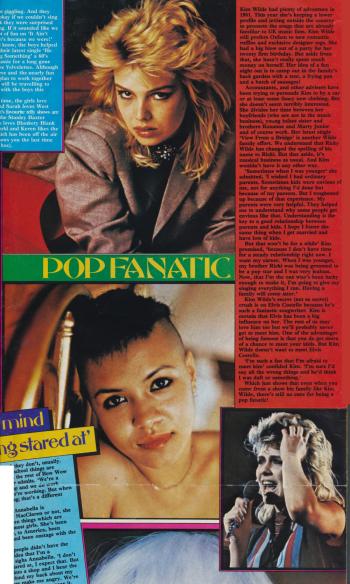