Kim Wilde's debut album is an immediately striking disc. It's filled with powerful rock arrangements that at times lean on '60s girl group mannerisms ("Water on glass") and at other times on more contemporary rock ideals - like the reggae rhythms of "Everything we know".

If you get the impression that the full blast rock arrangements of some of the tunes might overshadow her actual singing abilities, Wilde shows the vocal panache to acquit herself quite nicely above the roar. The seething rock dynamics of 'Chequered Love' (her first U.K. hit - it made number one) give a sampling of Wilde's talents.

From the opening keyboard crescendo punching the tune into action, she sings the sexy lyric ("touch me, do what you want to") with just the right combination of innocence and knowing. Her second UK hit "Water on glass" (which also appears here) - an even better song - contains a similarly powerful rock punch with its Spector-esque drum sound and Wilde's sweet but tough-kid approach.

If one wanted to make comparisons, he'd be hard pressed to come up with any one singer who sounds exactly like Wilde. But I'll bet that the 21-year-old newcomer started out by listening to Dusty Springfield before working her way up to Debbie Harry. Wilde's impressive first try should not be missed. 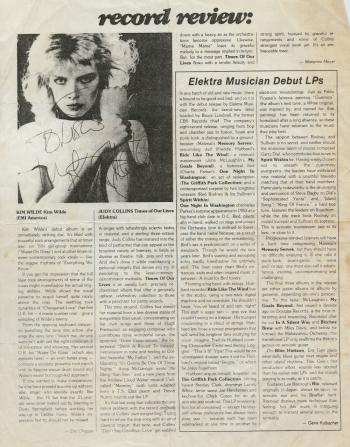