KIM WILDE "Kim Wilde" (EMI - British import)
The failure of this charming pop-rocker to be released  the U.S. is perhaps the mystery of the year, since it contains a major European hit, "Kids in America" which is about the most irresistible single of the year. No denying that Wilde's appeal is flimsy and superficial, but what's Pat Benatar, Shostakovich? Seek this out, if not just for "Kids in America", for "Chequered Love" and "Young Heroes". 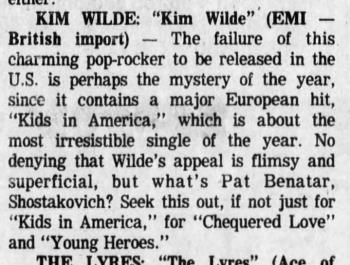