"Kim Wilde", the 20-year-old pop singer's 10-song, American debut LP - her first three singles have sold more than 6 million copies in Europe - makes no claims to art or substance. It is, however, full of verve, sparkle and charm; it's the best pure pop album of 1982. "Kim Wilde" is chock full of surface hooks - shimmering, layered guitar and keyboard lines that stick in the brain after one listen - but the songs are cut with wit and intelligence. Like the Go-Go's, Wilde's songs - written by her father Marty (an English pop star of the '50s) and her brother Ricky - are upbeat and bouncy without sounding mindless or contrived.

There are winning contrasts; in "Our Town" Wilde sings about a dying town with all the high-voiced cheer of a girl who just fell in love. Her first two English hits, "Kids in America" and 'Chequered Love", are standouts. "Kids in America" is a sexy anthem ("I'm not leaving now, honey, not a chance", she purrs) celebrating the eternal night out. "Chequered Love" bubbles with energy and lust. Even when the pace slows (on "Falling Out" and "Tuning In, Tuning On") the moody textures compell. Wilde sings these teen dreams (and fallen dreams) as a believer - and what comes across is the glory of pop, youth and life. 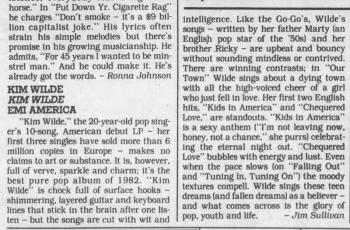