Kim is barely 21 years old. Within a year she had three singles high in the charts: "Kids in America", "Chequered Love" and "Cambodia". A fourth, "View from a bridge", is going along the same road. Just recently her second LP was released (with the latter two on it). It's all gone incredibly fast for Kim.
Sure, Kim had everything to make it. Father Marty Wilde was named in one breath with Cliff Richard and Tommy Steele 20 years ago, until he went down in a European Song festival. Her brother Ricky wanted to make it as a child star, but it didn't work out. Kim has grown up in that environment. Together with father and brother she writes her songs and they know what to do, but they also know the business through and through. Kim hsa built her career knowing what she was doing. Until now she hasn't done a live concert.
But that doesn't explain why Kim is going though such a successful career, and whoever has four hits in a row is certainly not a one hit wonder.
her new record answers questions like: How do I make a good song? How do I make in interesting lyric? How to combine music that has an impact with trends and sounding oriinal? A lot of knowledge, the right insights, the right feeling. But with that alone the music industry would have a formula to programme the hits they want, and that's not the case. There's something else: the artistic gift to make a spark fly. And that's the one gift Kim Wilde has. Select proves that a record can be commercial as well as really good. 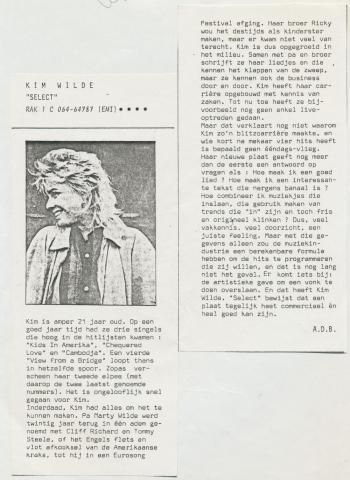