Her second album shows convincingly: Kim Wilde and her songwriting team, Ricky (brother) and Marty (father) deliver the most modern and also most commercial popsongs of the current music scene.
The ten titles - among which the hits "Cambodia" and "View from the bridge" - are all tailormade for Kim's voice and the music taste of the moment: the driving drum beats, broad synth sounds and Kim Wilde's incomparable voice giving the modern 82 sound. Both the softer ballads "Just a feeling" and "Wendy Sadd" show that Kim Wilde can interpret slower songs with a 'bite' - but the emphasis is obviously on the uptempo pieces like "Take me tonight", "Chaos at the airport" and "Action city". A brilliant album, that shows off Kim Wilde's personality. 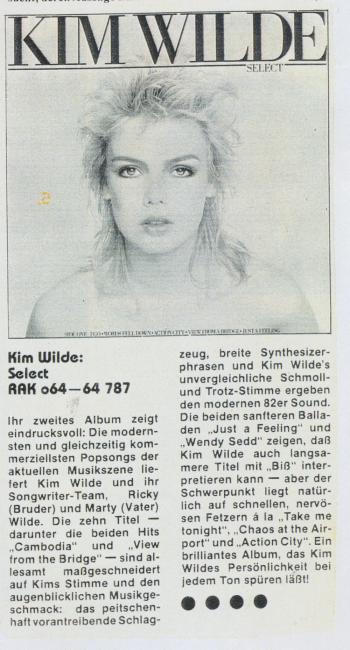