Hosannah, the start is here. When you read this the English rock goddess Kim Wilde has done the first leg of her European tour. After some "try outs" in Denmark "hotlips" stormed the English coast at the end of October and was flooded by gulfs of enthusiasm. When she started to sing it became even better. The continent of Europe was (predictably) a triumph for the blonde girl after this. She gave us an interview, still panting after her performance.

Be honest, girl - were you as nervous as we were before the concert?
During previous instances I've admitted to be nervous as hell thinking of the possibility of forgetting the lyric of a song. I started too early or too late a couple of times, but my band has dealt with this perfectly. With the lyrics I've had no problems.

Any other problems?
During a few concerts the quality of the sound wasn't the best it could be. But you learn to live with that.

Do you get the impression that everyone comes to listen? Your fame as a sex symbol is growing every day.
Not least because of your writing, probably. I think the reaction of the audience is positive. There've been no problems. I don't doubt that part of the audience cames out of curiosity. Just to look seems like a waste of money to me. It's better to buy a poster if you want to do that.

On the poster I've got you dress sexier than you do on stage.
What poster?

Short skirt, net stockings, high heels, provocative look...
I like posing, the style of Marilyn Monroe is not strange to me. But the stage is something different. I'm not doing the Debbie Harry things with short skirts and everything. I'm not standing there to be looked at. I take my job as a rock vocalist seriously. If the audience becomes excited because of what I'm doing I can't help that, but to provoke them is something else. I will never do that consciously.

With your body you can come a long way. Something else: you were afraid of your own people in the beginning. Why?
I am less popular in England than I am here. My second LP is more or less a flop there and the press is more sceptic, I was very nervous during the first few nights. It all went well, though.

According to Cliff Richard your father is exploiting you. Dad would send you on stage and cash the cheques at home. Right?
It's a strange quote. Cliff isn't usually so tactless. Maybe he should get married. I don't let myself be sent anyway, not even by my dad. I enjoy this life to the fullest.

What are you going to do now?
Kick you out and take a hot shower. I'll see you later in the bar, I'm afraid... 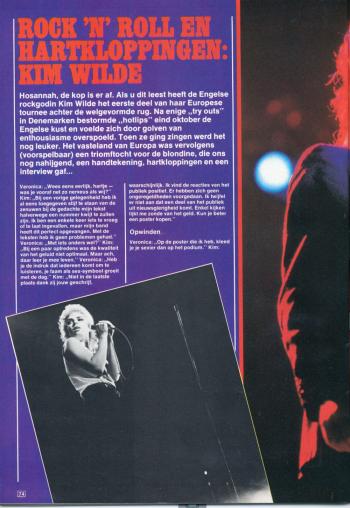 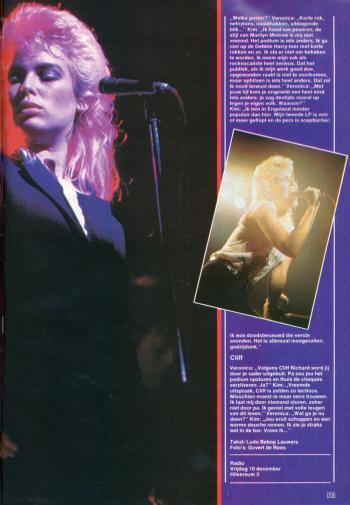