Her father, Marty, the famous rock singer of the 1960s, writes her songs. Brother Ricky produces and plays in her band. But she dreams of doing it all by itself.

The blue eyes and dreamy eyes, the fleshy and mocking mouth: Kim Wilde, a blond English of twenty-one years of indisputable sex-appeal, has conquered in a very short time a broad consensus among the audience of her peers. Waiting to perform live, a real "fire test" to demonstrate her abilities has appeared on TV at "Discoring", "Happy Circus", "Mister Fantasy", the programs dedicated to young music, where he presented her songs, a pleasing "mix" of pop and rock in the '60s, made fresh by his fresh voice. In short, she has taken off right away. In England, Holland, Denmark, Sweden, Belgium and Germany, her first LP, an album bearing her name, is in the top area of the sales charts. And because of her beauty, she deserved the nickname "European Blondie".

Daughter of Marty Wilde, a well known rock singer of the 1960s, before going to the drawing room, made the quiet life of any student. Then, with "Kids in America", her first single, she is helped by dad Marty, who composes the lyrics of his songs, and by Ricky. Her brother and producer at the same time, keyboardist and guitarist of the band, accompanies her.
Kim, therefore, does everything in the family. But to those who ask her about her relationship with her father, she answers, grumbling in her face, "I do not want to answer", which leaves open many doubts about their true intent. However, he says, "I have to go to a very professional point of view. I began to imitate him as a child, humming the songs he composed, especially those less well-known."

How do you feel like a "daughter of art?"
Very uncomfortable, if I have to be honest. I live it like a problem. When talking about me, one can not help but talk about my father, even though they have spent so many years since the time of his success.

In Kids in America, you talk about the problems of your generation. And in "Cambodia", your most recent single, dealing with the problems of Southeast Asia. Is your firm commitment to raising social issues?
No. Not necessarily, at least. I just look at reality and make it into music. And that's the only thing I'm interested in, because I think music is the best way to express what's inside, beyond precise political or social commitments. Sure, I have my ideas, but I keep them for myself. And above all a mood common to all those who have my age I intend to communicate.

Did you come from a wealthy family to help you or to interfere in dealing with your life?
See, despite being a wealthy family and having a famous father, I've always lived in Chiswick, a socially mixed neighborhood in London. And this fact was very important, helped me to look at reality. Not to mention, also that my father, before he was successful, was poor and lived in the day. So I've heard this kind of problem. Maybe one day I wrote a song about it all. But first I must learn this craft better! After all, these are just the first steps...

What's in your dreams?
At a professional level I would like to become a great international star. As for my private life, I dream of having a beautiful home for me in London, so much time and lots of friends to have fun and go to concerts.

But do not you think about love, marry, how do all the girls of your age?
No. At least for the time being. Maybe one day, who knows ... Now I would feel too attached. First of all I want to think about music.

Really there is no "special" guy in your life?
Seriously? There are so many!

She says this last sentence with the world's worst air. Then suddenly she looks into my eyes and laughs mischievously. 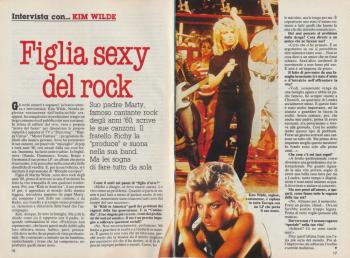