Kids in America began her career. After this, Kim Wilde has stayed in the charts almost continually. It led to a spectacular Grand Prix-vote victory - over 9000 readers were of the opinion that Kim is number one! On stage we have not yet seen Kim. But he has not forgotten the Finnish, faithful admirers. Wait and see what happens in the spring!

Next spring, Finland's turn will finally come, told Kim Wilde, voted Favourite in our Grand Prix to our special correspondent in England, upon receiving the Favourite glass vase. Kim will first go on a small break and then begin making a new album. 'Thereafter, the intention is to make a decent tour of Scandinavia and that we will be in Finland this time, I owe it to you ...'

The year 1982 was pretty busy for Kim Wilde. Early in the year she took Japnissa promo trip and recorded a TV ad, and she signed a contract to enter into America. In spring and summer traveled frequently abroad, performing in various countries in TV programmes, and it took place in the autumn, many of which had already been a long time dreamt of: Kim Wilde concert stage!

And what a success it all became, testing the band during a Danish mini-tour, after which Kim began a 19 date England tour in Bristol, and finishing at London's Dominion Theatre in late October. Kim ends every concert with her first and so far biggest hit Kids in America. Now we would like to thank the Danes and the British who inspired Kim to go to Finland and other Nordic countries. Good things are worth waiting for and now is expected to visit, of a kind, Finland has not seen since the last decade.
Kim was handed a Favourite Grand Prix victory in a handsome glass vase. She deserves it because the English pop singer is absolutely charming, sympathetic and friendly.

This year marked the release of Kim's second album. A few songs were recorded before Christmas and in January, a couple of weeks after her holiday, Kim, Ricky and father Marty start the album while making a studio in St John's Wood. Marty and Ricky took care of composing while Kim focused on the vocals. I met Kim in mid-February, when she told the following: 'I have been offered other compositions, but they are never been good, we have decided to use ours. As soon as we start to use other materials there is a danger that we lose our identity, we are trying constantly to build.'

The LP was a success and when it was released in Finland in the autumn, it rose to number three in the favorite Hot 100's. Also published in the spring of Kim's new single, Cambodia, which increased in March to sixth place and, after already falling a couple of months it went back to the same position again in June. Next, View From a Bridge also reached number three in July.
I met with Kim again in March when she told about her U.S. record deal which took five minutes to complete. She also told us they had a hard time getting into different TV programs in Europe. She was just about to leave Paris to appear in Johnny Hallyday's TV show and after that the German Musik Laden. Kim told me that he has started jogging to prepare for the upcoming tour. She talked about touring all the time but the record company wanted Kim to have a bigger concert repertoire.

'I am very willing to go on tour and will be happy to begin in Finland', Kim told me just then. 'But these things do not catch me alone. However, it seems that, finally I get to the stage before the summer is over.'

In May, Kim traveled to Japan for a promo tour, because her TV ad began appearing on TV Nippon. TV ads are a gimmick used by many British pop stars use to try to make themselves known in Japan. Kim's case, it worked quite nicely, and the Japanese press was all over her asking for an interview.

Finally in the summer came the American release of 'Kids in America', and it did surprisingly well, remaining on the Billboard Top 100 list four weeks, reaching number 25. Finland released a new LP Select, which in September found a Favorite list a third party from someone. In September the tour was also Kim's true. Suosikki was present in Copenhagen, and again in Leicester, where Kim received the award for Favourite.

Now is the chance that Kim's receiving the best of Finland. Thank you, bookmark your agendas. You are owed a concert .... 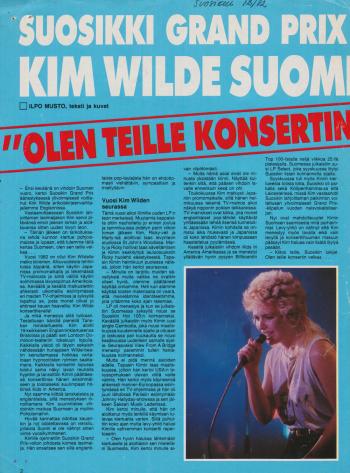 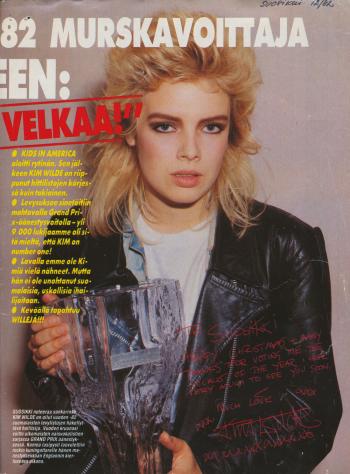