The fleeting world of chart success has a new teen idol: Kim Wilde. Daughter of Marty Wilde, himself a reasonably celebrated star, and with a father like that it's almost self explanatory that she would end up in music, just like her brother Ricky.,

The three of them form a family company, in which Marty writes the lyrics, Ricky composes and produces and in which Kim represents the concept. A concept, that plays on the teenage emotions and is released by RAK, a record label that plays on the teenage idol sentiments for years. Kim Wilde only performed on records so far, as a good looking sex symbol, selling her products with her exterior and a contrived - 'young and still modern' - image. Kim initially consciously stayed away from concerts, but now it has come this far that she wants to perform live as well.

Sunday night, during a sold out concert at the Utrecht Muziekcentrum, Kim did her best to have the music sound exactly the same as on record. Predictably, this didn't happen at all. Kim Wilde's looks had something disarming, although she looked like the baker's daughter from across the street rather than the sex symbol she was made out to be. The emotions she had to give a voice stayed unreal, clinical and one dimensional. She also missed many notes. And the band didn't have any redeeming features either.

The song material from her two albums got a flat performance, although it has to be said more work went into the hit singles, which were strategically scattered over the setlist.  Like the somehow more dynamically performed 'Kids in America' in the encore.

We shouldn't be too critical of Kim and shake our heads. Like the t-shirt she wore said: 'the girl can't help it'. She is no more than a well trained marionette, a radar in the amusement machine of the Wilde family. 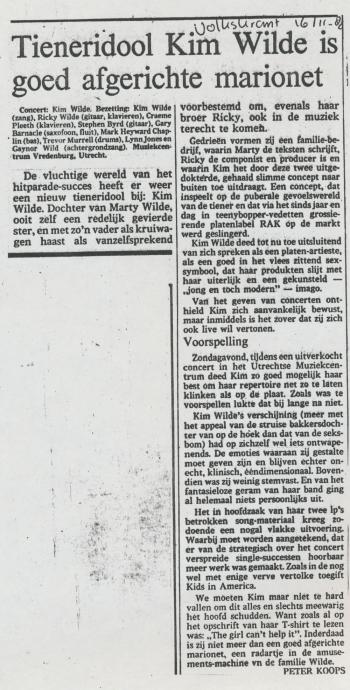