In which Mark Bentley, Susan Lush, Nicholas Corfield and Jane Pike get a chance to interrogate Kim Wilde. Johnny Black was listening in.

Kim Wilde, clutching a large orange, wanders into an office decorated with gold discs, some of them hers, and immediately starts chatting with the small group of Wildemaniacs who have staggered through the cold and rainy November night to get the facts straight from the popstar's mouth.

Mark Bentley, a North London 18-year-old with ambitions to be a disc jockey, gets to the point with no beating around the bush: 'Is it sex or talent that sells your records?'
Kim, dressed demurely in a short black striped skirt with black woolly stockings, black top, gold chain and black stilettos, concentrates hard on peeling her orange.
'That depends on the individual buying the record. To some I'm a sexy pin-up, to others I'm someone who sings songs they enjoy. I'd like to think that mostly it's the song and th eway I perform it, but I don't mind what people get out of me, I don't expect resect or anything from anybody, because singing is basically a selfish thing to do. It isn't beneficial, like being a doctor'.
Mark isn't going to let her off th ehook just yet though and argues.
'Surely singing is beneficial because it makes people happy?'
'That is an important aspect of it. I've seen the pleasure my dad ('60s popstar Marty Wilde) gives people when he sings, and it is a fundamental, worthwhile thing. When I make a video, or sing a song, I hope I give people pleasure, but I don't play on the sex angle because it is too one dimensional. Nothing bores me more than page three girls... and yet sex is supposed to be the most exciting thing in the world. So the ytell me...'
A long, exaggerated sigh from the Wilde one silences Mark for a moment, giving Susan Lush a chance to nip in with: 'How old were you when you started singing?'
'I've always sung, but I started professionally from about the age of eeven. When my brother Ricky had a career as a pop singer, me and my mum did vocal harmonies for him. I was in the choir at school, too, but my first record was in January this year... well, apart from one I put out a long time ago which I'd rather forget.'

Fifteen-year-old Susan, from Upton Park, decides to let Kim forget about it, and changes the subject. 'If you weren't a singer what else would you have been?'
'I always wanted to be a singer. It was inside me. At school I hated all the academic subjects, and preferred to study drama, dance, art... all the things the teachers thought were pretty useless. Unfortunately, you can't go to a school of pop singing.'
Nicholas Corfield, a 19-year-old from Welshpool, with a nice line in red and black striped trousers, takes up the same subject. 'I'm at the Central School of Speech and Drama, and I wondered if you ever wanted to be an actress?'
'Yes, I did a lot at school, wrote a play in sixth form. It was an outer space love story, not wonderful, but I learned a lot because I also had to direct it, coach the actor, make the sets. Probbaly, just because I am Kim Wilde, I stand a better chance of becoming an actress than most people, but I try not to use my position to open doors for me. On the other hand, because I'm from a showbiz family, it was relatively easy for me to get and Equity Card. Some people think I have to justify that, but I can't apologise for who I am and the luck I've had. I wouldn't have minded having to slog for it, but I can't change it.'

Nicholas had come well prepared and surprised Kim by asking, 'Have you ridden your new bike yet?'
'How did you know about that? I only got it the other day for my birthday.' Nifty Nick had found out from ataxi driver who had collected some guests from Kim's birthday party at Knebworth House.
'Is nothing secret? My dad gave me the pushbike to keep me healthy because I never get enough exercise. I bought a pair of roller skates forthe same reason, with visions of skating into the recording studio or over to my friend's house. I went outside in the pouring rain, fell over and just lay there, convinced I was crippled for life.'

The last member of the Spanish Inquisition, 17-year-old Jane Pike from Lewisham, wanted to know how Kim chose her clothes.
'Well, I bought his skirt because I saw Clare of Altered Images wearing one like it. Very comfortable, just the right length. You know, I was in Kensington Market the other day buying a pair of stilettos and a record came on the radio of my mum singing in the Vernon Girls. I wanted to ask the assistant if he realised it was my mum on the radio. I never think of myself as a popstar. When I see Depeche Mode or somebody on Top Of The Pops I think of them as popstars.'
Jane also asked the question most Kim fanatics want answered.
'When are you going to tour Britain?'
'I'm busy making the next album right now, and I hope to tour in January to coincide with the release of the album. You see, many of the tracks on my album are just done by Ricky and me, and we don't have a proper touring band yet, so we will need a lot of rehearsals before we tour.'
'What sort of music influenced you when you were younger?', asked Nicholas.
'Everything. I vividly remember the '60s, Carnaby Street, Gene Pitney, Cilla Black, the Stones... I must have been about seven then, but if they ever come on the radio it takes me right bac kall those years. I try to listen to a wide range of music, not just rock and roll or soul.'
Jane, the quietest of the bunch, tended to observe the action studiously, but did manage to ask: 'Is there another artist you'd like to work with?'
Kim obviously liked the question, and her face lit up. 'Elvis Costello', she almost shouted. 'I love country music and I think we should make a good version of 'Sleepless nights' with me singing harmonies. Nice little duet.'
'Do you think your music is changing?', inquired Mark, looking a little worried about the possibility of a country Kim.
'Inspiration comes from everywhere, so my music is bound to change. I wouldn't want our music ever to be put into any particular bag, I'd liketo do as many different things as I can. Maybe like 10cc, who can do beautiful love songs, or modern cha-cha or even make videos.'
'Would you like to make a video album?' wondered Nicholas.
'If the ideas were good, sure. But not just for the sake of doing it. I don't understand the logic they use about which videos to show on television. I had trouble with mine for 'Cambodia' because they said it was too sexy to have that snake crawling over me. And The Police had trouble because of the Irish terrorist things in the 'Invisible Sun' video, but you can see much worse than that on New At Ten every night.'

After the half an hour the session developed into an extended gossip session with Kim learning as much from our fab foursome as they learned from her. She was particularly pleased to learn that Adam Ant has a blonde girlfriend, discovered a shared interest in the B-52s with Susan, and when Nicholas told her about the hostel full of young boys he lived in, she sighed. 'Mmmm. Aren't you lucky?'
Even the photo-session afterwards continued with the feeling of an old pals' reunion. Kim telling tales of meeting Sting, clearing up until 8.00 in the morning after her 21st Birthday party, and outlining the horrors of taking care of younger brother Ricky.
We eventually left her looking through fan mail before she set off for the studio to record a track for the new album. As we left the offices of her record company, Mark summed the whole episode up neatly. 'I really enjoyed that. She's so incredible, so normal.'
Maybe he had expected a thing with two heads and all he got was an intelligent, multi-talented, sex-symbol pop star. Seen one, seen 'em all, I guess. Thanks Kim. 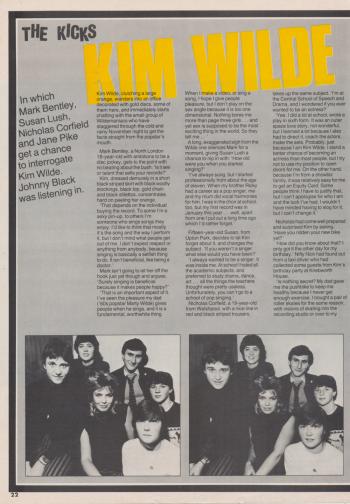 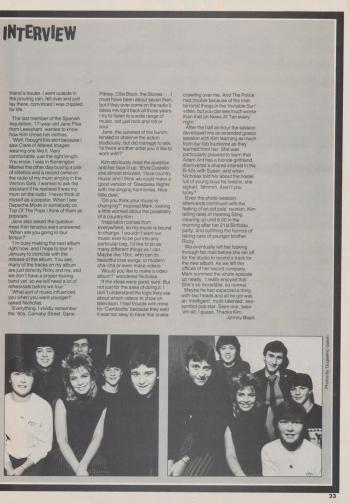